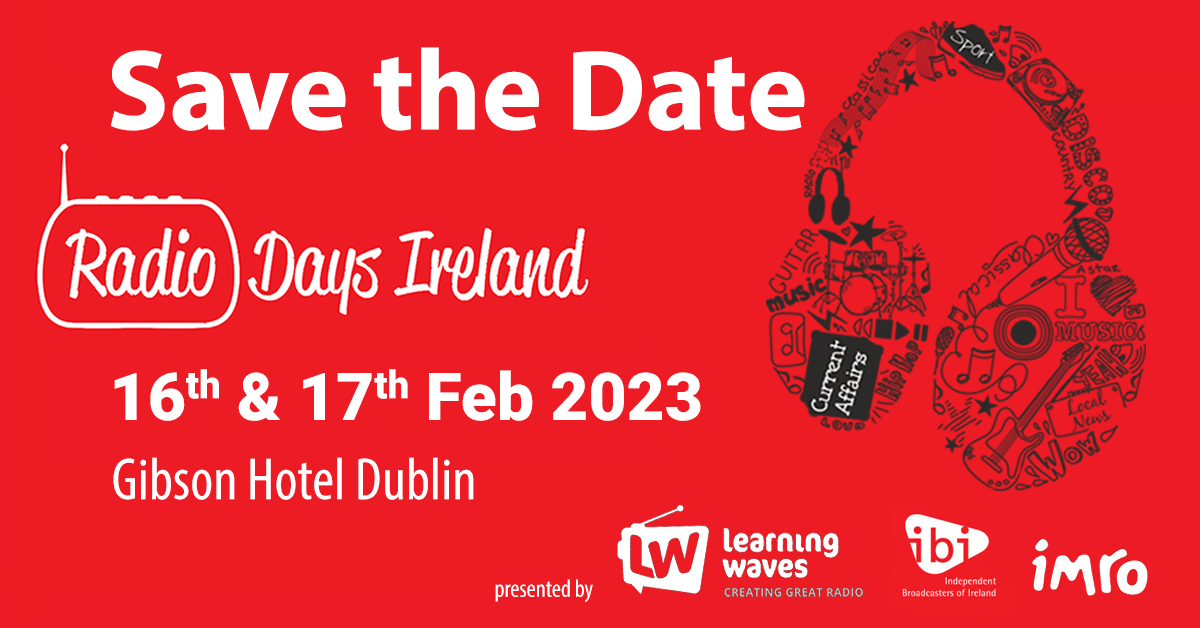 Learning Waves, the training body for the Independent Radio Sector in Ireland, along with the Independent Broadcasters of Ireland(IBI) have announced dates for Radio Days Ireland 2023.  The two day conference will take place on 16th and 17th February 2023 in the Gibson Hotel.  The conference which will feature a range of speakers from Ireland, UK, USA and across Europe will take place from 2pm on the 16th February and will finish up at 2pm on 17th February 2023.

The conference which was last held in February 2020 will celebrate the achievements of radio over the last 3 years and will look to the future of the medium from a content, revenue, digital and management perspective.  A number of speakers have been confirmed for the conference so far and include :

Pat Kenny joined Newstalk in September 2013, bringing with him an invaluable experience in broadcasting. One of Ireland’s leading broadcasters, Pat had a prolific presenting career at RTÉ for over four decades presenting Saturday Live, The Pat Kenny Show, the Eurovision Song Contest, and of course, The Late Late Show. Pat then took to screens on Virgin Media One hosting the Pat Kenny Tonight show. Pat’s career in media in parallel to his academic "day-job" working as a continuity announcer on RTÉ radio in the mid-1970s. His versatility won him a Jacob’s Award in 1986 for presenting three diverse radio shows: Saturday View on RTÉ Radio 1, and The Kenny Report and The Outside Track on RTÉ 2FM.

Staxx is based in New York City as Creative Services Director for Z100.  On top of crafting audible tales on iHeart Media’s flagship CHR, he’s also making noise for sister station 1035 KTU and Alternative flagship, Alt 987 in Los Angeles.  A musician, improviser (don’t ask!), and a growing VO who’s heard globally on Virgin Radio Dubai, Q Music in Holland and Belgium, and as Wolverine in the Marvel mobile game SNAP!

In February 2022, Dr Karen Weekes became the first Irish woman to row solo and unsupported 3,000 miles across the Atlantic Ocean as part of the ‘SHECANDO2021’ campaign. By successfully  completing this journey Karen became the 20th female worldwide to have ever rowed across any ocean solo.  Karen is an adventurer, lecturer and sport psychologist who specialises in cognitive and practical coping techniques for endurance sport. Her academic research has explored motivations and cognitive coping strategies of ultra-endurance athletes. Her presentation will provide an insight into the challenges and effective coping tools she employed while at sea, linked in with how they can be transferrable to other work and everyday life situations.

Additional speakers will be added to the conference line up in the coming weeks.  Full details for the conference and booking details can be found on www.radiodaysireland.ie

See below the highlights from our conference in 2020 :