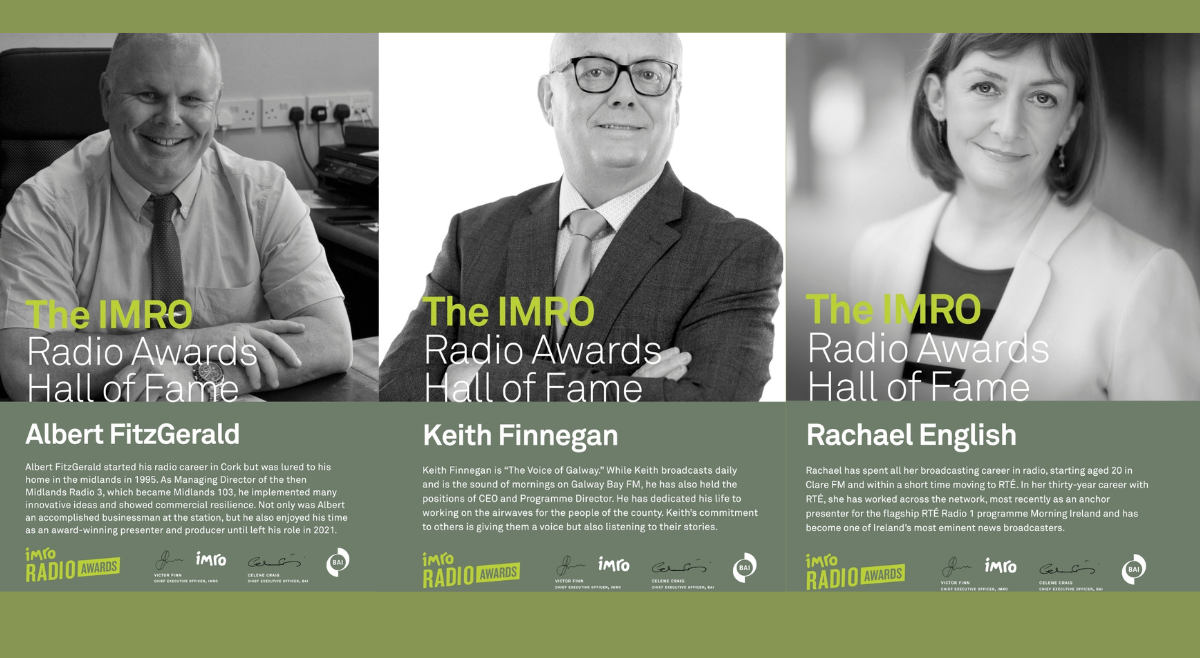 Since its establishment in 2012, the IMRO Radio Awards Hall of Fame has been recognised as one of the most respected honours in the world of Irish radio. Previous inductees include Joe Duffy, Marian Finucane, Pat Kenny, Ian Dempsey, Aine Lawlor and Gay Byrne.  At a ceremony today in the office of IMRO in Dublin, The IMRO Radio Awards Committee welcomed three new recipients into the Hall of Fame. Chosen by a group of their peers in the Irish radio industry, the inductees range from national to local radio broadcasters, all highly respected for their skill, passion for their jobs and love for radio.

Speaking at the ceremony today, Chair of the IMRO Radio Awards Committee , Chris Doyle, said, “We are delighted to celebrate three giants of the radio industry from across Ireland and induct them into IMRO Radio Awards Hall of Fame. Rachael, Keith and Albert have worked in front of and behind the microphone delivering audience and commercial success in their respective careers.  It is great to recognise their immense contributions to making the radio industry the vibrant success story it is.”

Doyle added, ‘Today is tinged with sadness that Albert Fitzgerald is no longer with us, he is such a deserving recipient of the award, and we know he would have thoroughly enjoyed being here. We are delighted that his wife Siobhan and his sons Stephen and Andrew could join us to remember Albert and his amazing radio career.”

“On behalf of IMRO, I would like to say how delighted we are to be involved once again with the IMRO Radio Awards Hall of Fame. It gives us great pleasure to be inducting three of our most revered and cherished radio professionals Keith Finnegan, Rachael English and the recently deceased Albert Fitzgerald into the Hall of Fame. Each of our inductees have made a lasting impression on the industry and they now sit alongside the leading lights of broadcasters in Ireland.”

Chief Executive of the BAI, Celene Craig,  said : “The BAI is pleased to congratulate each of the 2022 inductees to the Hall of Fame and celebrate not only their achievements but their significant contribution to the radio sector over many years. The Hall of Fame serves to acknowledge the important part played by individuals within the radio industry, and I’m delighted to see today’s recipients included”.

Her career began at Clare FM in Ennis. She joined RTÉ in 1991 as a 2fm news reader and later worked as a reporter for Morning Ireland; the News at One, Today With Pat Kenny and RTÉ Television News.  Rachael’s first full-time presenting job was on Five Seven Liveon RTÉ Radio 1. She presented The Late Debateand Saturday Viewbefore joining Morning Irelandin 2010. She has also worked on a number of special series. These include The Constituency,which focused on the issues and candidates in all of the Dail’s constituencies, and The Big Science Debate,where an expert panel discussed the ethical challenges presented by scientific developments.

Since 2002, she has been a presenter on RTÉ Radio 1’s General Election results programmes. She has also presented coverage of local, European and presidential election counts and has anchored election coverage from Belfast, London and Washington.  As a reporter and presenter, she has worked on a vast range of national and international stories, from the signing of the Good Friday Agreement to the Olympics Games to the Cop 26 Climate Summit. Rachael is the author of six novels, most recently the number one bestseller, The Letter Home.  A communications graduate of Dublin City University, she is from Shannon in Co. Clare.

Keith Finnegan began his life in radio in 1981, joining Galway Bay FM in 1989 at a time when the station was struggling to survive. With the help of a supportive Board of Directors, Keith turned the fortunes of the station around and, since then, has dedicated his life to working for the people of Galway on the airwaves of Galway Bay FM.  Not only has he been CEO and Programme Controller for 33 years, he still hosts the current affairs programme, the most listened to programme on the station reaching many thousands of people every morning.

His role in the community far exceeds the 3 hours he spends broadcasting every morning. He sits on the boards of many Galway Charities, such as Aids West, Cancer Care West and Galway Hospice. In 2015 launched, the first Galway Bay fm Radiothon, raising hundreds of thousands of euros for the two cancer charities and winning a Gold IMRO Radio Award in the process. Keith spends weeks preparing interviews to highlight the stories of families touched by cancer – and they were powerful testimonies to his work, love and devotion to both charities and their users.

Keith is a great ambassador for Galway, forging deep links with many states in the USA, including Chicago, Wisconsin, Missouri, Boston and New York. For the last 20 years, Keith brought a delegation from Galway to the Milwaukee Irish Festival – the largest Irish Festival in the world, to promote Galway as a tourist destination. He broadcasts from the festival each year to bring some of the Galway pride from the US back to audiences in Galway. Included in the trip is a meeting with the Mayor of Chicago. Keith is also Chairman of the Chicago/Milwaukee Sister Cities Committee. This, in turn, has led to large delegations coming from the states to visit the West of Ireland. Keith has been a Guest of Honour at the St Patrick’s Day Festivities in St. Louis, following in the footsteps of former Taoisigh Bertie Ahern and the late Jack Lynch and former SDLP leader John Hume.

Keith has been involved in the development of the industry both directly as Director of the IBI and as a vital cog in its Lobbying and Advocacy Sub Committee. He lobbies for legislative change on a weekly basis and is a regular visitor to the offices of Ministers, TDs, Senators and Departmental officials, canvassing for change to ensure fairness and equality in the broadcasting landscape in Ireland.   He was instrumental in the organisation of the celebration of 25 Years of Independent Radio in Áras an Uachtaráin, hosted by President Michael D Higgins. Indirectly, he supported the involvement of Galway Bay FM staff in radio industry initiatives such as Learning Waves, BAI Irish Language Committees and IBI/Hot Press Irish Music Month.

The compassion he has for everyone he meets, the trust he is afforded by the people of Galway, the work he does behind the scenes to help people, many of whom have aired their problems on air, his pride in his home county of Galway and his efforts and attempts to do whatever he can to help the people of the city and county. Keith is far more than just ‘The Voice of Galway’. Not only does he give others a voice, but he listens to their stories and will always follow up to check that a resolution has been reached.  He works tirelessly to help the people of Galway, promote the city and county of Galway and is very much part of the fabric of Galway.

In summer 2022, Keith stepped back from management in Galway Bay FM but remains broadcasting five days a week. Thirty-three years managing, developing and directing a radio station is no mean feat but one which he has done quietly and successfully while ensuring that the radio industry in Ireland is left in the best position possible for future operators, broadcasters and, most importantly, listeners.

Albert Fitzgerald began his radio career as a salesperson with Cork’s ERI, instantly falling in love with the medium and receiving promotion to Sales Director in less than six months. Romantic love lured him away from Cork, and he briefly left the industry, returning in 1995 to then-Midlands Radio 3. The business was deeply loss-making, and listenership was the lowest in local radio. Albert pledged to his future wife that he would spend less than a year there. However, Tullamore remained their home because of the impact Albert would have. The training was his first priority, a belief that saw him later serve as a founding director of the radio industry training body, Learning Waves. With proper sales structures in place, the company became profitable, and major competitions drove greater listenership.

The all-new Midlands 103, its fortunes reversed, was an attractive takeover target, and when the Tindle Family conducted due diligence, they wanted Albert to become Managing Director as a condition of purchase. On assuming control, he successfully secured the 2004 licence renewal and launched a capital investment programme in transmission, vehicles and studios. Fortunately, these projects were completed in advance of the economic crash, which set the stage for Albert’s biggest test.

Confronted with plummeting revenue, client failures and doubtful debts, Midlands 103 adopted unconventional tactics. It immediately launched CrunchBusters, an early e-commerce platform on which the station would sell discounted products and services directly to listeners. These offers were sourced from clients who needed to advertise but no longer had the cash to do so. It was a win-win concept for all parties: the listener received terrific purchase offers, the radio station generated income, and advertisers could inexpensively maintain their brand profile. It proved popular with discretionary businesses such as hotels, restaurants and leisure centres.

Midlands 103’s commercial resilience caught the eye of Sir Ray Tindle, and, on Albert’s advice, he consolidated his radio interests into the three most profitable stations and appointed Fitzgerald as Group Managing Director. His commercial acumen also saw Albert hold a position on the Executive Board of IRS. These achievements were noted locally, too, with a Businessperson of the Year Award from the Tullamore Chamber in 2012 and a similar distinction from the Midlands Gateway Chamber a year later.

The 59-year-old was an accomplished presenter and producer, too, with a gold PPI Radio Award and a Justice Media Award. He used his music passion to promote charity concerts, raising over €100,000 for the Tullamore & District Rotary Club - the same organisation where, as President, Albert spearheaded a modernising policy to admit women as members.

Albert’s final year at the Tindle helm saw the birth of DAB in the Channel Islands and a new service called Soleil Radio. He stepped down as Group Managing Director of Tindle Radio in December 2021 in order to concentrate on his health and family.