News Irish audiences listening to a significant amount of Radio 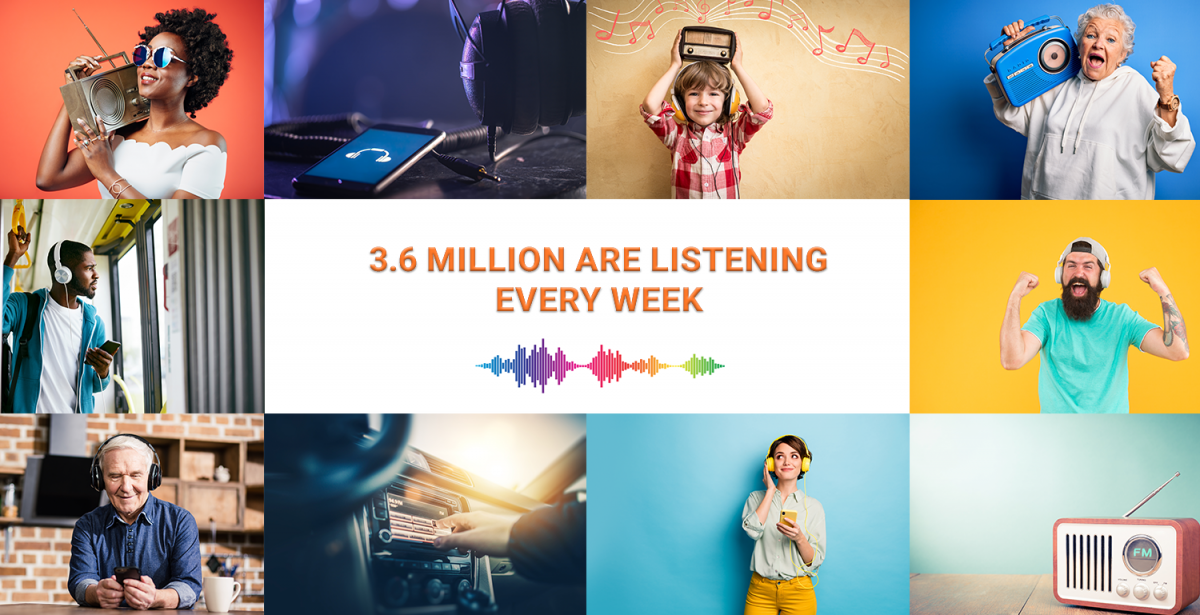 Irish audiences listening to a significant amount of Radio.

The latest JNLR/Ipsos MRBI report into radio listening has been published today (10th February 2022). It covers the period from May to December 2021. Due to Covid-19 restrictions there was no interviewing conducted in January, February, March and April 2021.  The latest results show 3.208 million listeners (15+) tune into radio every weekday – that is daily radio listening at 80% of all adults.
A total of  around 12,600 people were interviewed during the survey period by Ipsos MRBI, on behalf of JNLR - Joint National Listenership Research - that is commissioned by all national, regional and local stations, BAI, AAI, and IAPI.Radio Nova has recorded a further all-time high in its listenership figures in the JNLR radio ratings.

The research shows that Irish radio audiences continue to listen to a significant amount of radio everyday, tuning in, on average, for 4 hours per day during the prime 7am to 7pm time (Irish Adults listening Mon-Fri). In terms of share of all minutes listened in the country, National Radio currently has 45.6% share (+0.2%) of all minutes while Local/Regional Radio holds the majority share position with 54.4% (-0.2%) in this reporting period.

Considering the older 35+ age segment, Local/Regional radio is slightly ahead in terms of share of all minutes listened, 51.4% (+0.1%) compared to National radio, 48.6%. However, in regional markets among this age group, National Radio holds the majority share of minutes in Dublin (62.5%), the Dublin Commuter region (62.5%), the Multi-city area (53.2%) and North East & Midlands Region (52.4%).
Local radio continues to perform strongly in the local radio markets across the country – in many areas reaching more than 40% of the local adult population daily. In particular, on the criterion of share of minutes listened during prime 7am to 7pm, Highland Radio, Mid West Radio and Radio Kerry hold the majority share position(50%+) in their respective franchise areas.

The following is an overview of how some of our stations performed across the country.

CEO and Programme Director Kevin Branigan told RadioToday: “We’re ecstatic about the listenership figures today. We’ve worked very hard on our programming, music and content over the 12 months and it’s gratifying to see this coming through with these really strong listenership figures”.

The latest figures come after a busy year for Radio Nova. The station announced in January that it had appointed radio strategists Liam Thompson and Dave Kelly as executive consultants to Nova and its sister station Classic Hits Radio. The two stations subsequently swapped breakfast shows with PJ Gallagher & Jim McCabe moving from Classic Hits to Nova and Colm Hayes and Lucy Kennedy moving to Nova.

Matt said: “We’re thrilled to have our largest audience in a decade. It seems we’re hitting the right note with our content on The Last Word, a smorgasbord that delivers the right taste for our listeners!”

Commenting on Today FM’s results, James Brownlow, Managing Editor, Music & Entertainment, Bauer Media Audio Ireland said: “Bauer Media is already home to Ireland’s biggest commercial radio shows and personalities, but these latest audience figures from Today FM are a different class – in the last 3 listenership surveys, Today FM has seen the biggest growth in the market, thanks to Ian at Breakfast, Dermot & Dave with Ireland’s biggest commercial radio show and The Last Word with Matt Cooper which has achieved its highest audience on record.”

Newstalk has registered strong weekly reach growth and now has an audience of 784,000 and a National prime-time Market Share figure of 7.0%. The latest results show audience increases across all primetime shows with all-time high results for the Newstalk Breakfast with Ciara Kelly and Shane Coleman, Lunchtime Live with Andrea Gilligan, and The Pat Kenny Show, which is has become Newstalk’s biggest ever programme. Newstalk also cemented its place in Dublin as the second most listened to station with an all-time high prime-time Market Share figure of 11.9%. The station has grown its weekly audience to 784,000 (up 17,000 Book on Book) and its daily audience to 435,000 (up 10,000 Book on Book). Newstalk has achieved a national prime-time market share of 7.0% and in the key audience target of 25 – 44-year-olds, Newstalk outperforms RTÉ Radio 1 on daily audience with 12,000 more listeners.

Managing Editor of Newstalk, Patricia Monahan commented today: ‘We are delighted to see our audience continue to grow and to see that our output is resonating with and engaging even more listeners. We are particularly delighted to see growth in the 25 – 44 year old audience consolidating our position as the talk station of choice for a new generation.’

SPIN 1038 has further grown its position as the Number 1 Music station in Dublin, extending its lead over FM104 on daily and weekly reach. SPIN South West continues to show its dominance in the region with a primetime market share figure of 12.2% and it remains the Number 1 station in the region, ahead of RTÉ Radio 1 on daily reach. 98FM delivered another strong performance with growth on all key audience measures including weekly reach, daily reach and market share positioning it well for continued audience growth in 2022.

Commenting on the latest JNLR for the Bauer stations, Bauer Media Audio Ireland CEO Simon Myciunka said: “We are delighted that the growth our stations experienced during the pandemic has continued. It is evident that our leading audio brands are in tune with audience demands and deliver the mix of music, entertainment and talk radio listeners want.  Radio continually justifies its place in the modern media mix. With a combination of live and on demand content delivered both digitally and via FM, radio is an incredibly attractive medium to connect advertisers with audiences. Congratulations to the whole team at Bauer Media Audio Ireland, it is a combined effort that delivers results like these, and everyone should be proud of the great work that’s done each and every day.”

Ireland’s Classic Hits Radio has recorded its third successive JNLR all time high in the latest JNLR. The ratings give the multicity broadcaster 321,000 weekly and 161,000 daily listeners, increases from 309,000 and 158,000 respectively on the last JNLR survey. Market share now stands at 5.2% in the multicity area. *

CEO Kevin Branigan said: “These are very encouraging listenership for us today! Ireland’s Classic Hits Radio is one of the largest radio stations in the country and our growing figures over the last 18 months demonstrate this more and more. Our team has worked very hard over the past 12 months and its such a great feeling to see this work and innovation coming through in the JNLR today.”

Sunshine 106.8 is now the number 1 music station in Dublin for Market Share for adults aged 18+ in the 7am-12midnight period. Afternoons on Sunshine with Carol Dooley (2pm-7pm) continues to hold the number 1 position for market share with all adults (15+) and remains the market leader for all music stations in the capital during the 2-7pm time period.

Live 95 has almost 100,000 listeners tuning-in every week, which is 60% of the people of Limerick City and County, or 6 in 10. Station Director of Live 95, Joe Nash said: “We are honoured to serve the people of the great City and County of Limerick and grateful that they continue to respond in such numbers to Live 95 and our mix of the best music, chat, sport and detailed focus on local life in Limerick. I want to thank the team on-the-air and behind the scenes at the radio station for their hard work and dedication to delivering a service that the listeners of Limerick engage with so much and thanks also to our loyal advertisers, for their really valued support.

“Having kept Limerick listeners company during the pandemic, we are now looking forward to being with them as local life opens up again. There is lots to look forward to in 2022, including the St Patrick’s Festival, the Great Limerick Run, Munster Rugby, the Limerick hurlers and maybe even a scorcher of a summer and Live 95 intends to reflect and be part of all of this, during a year when hopefully we leave Covid behind us, as much as possible.”

Beat Breakfast presenter and Head of Station Sound Niall Power says: “We’ve seen the important role that radio has played for people in Ireland during Covid and I think now that we’re starting to come out the other side of the pandemic, that appreciation of having such easy access to relevant news and information, a friendly ear, a bit of laughter and great music is being felt more. We look forward to welcoming more new listeners in the future to add to our consistently loyal fanbase.”

Commenting on the positive news, Beat CEO, Gabrielle Cummins, said: “Given the seismic impact of Covid over the past two years, I’m delighted that the hard work of the entire Beat team through what has been an incredibly challenging time has been warranted by such positive listenership figures. It seems the pandemic has only served to galvanise our audience’s relationship with the station, so as we exit what appears to be the worst of the pandemic, Beat will strive to be an even more intrinsic part of our listeners’ lives.”

Tipp FM has maintained its position as Tipperary’s Number 1 radio station with 76,000 listeners tuning in each week. The station continues to rank among the most listened to local radio stations in the country, with more than double the listenership of any national or regional station in the County.

Welcoming the JNLR figures Tipp FM’s Programme Director Stephen Keogh said: “Another set of spectacular figures for Tipp FM as we consolidate our position as number one in the Premier country.

“With an increase of 17% in the last book there’s always the fear of decrease, however thankfully we’ve maintained our lead over the opposition. In fact, we’ve increased our 7am-7pm market share which shows listeners tuning in are staying with Tipp FM for longer. This is fantastic news for our loyal advertisers who are recovering from the pandemic, and gives them reassurance that their message is being heard by so many listeners in Tipperary.  As always, the results are a credit to the dedication of such a talented and hardworking team at Tipp FM. We are extremely grateful to all our listeners and advertisers for their continued support.”