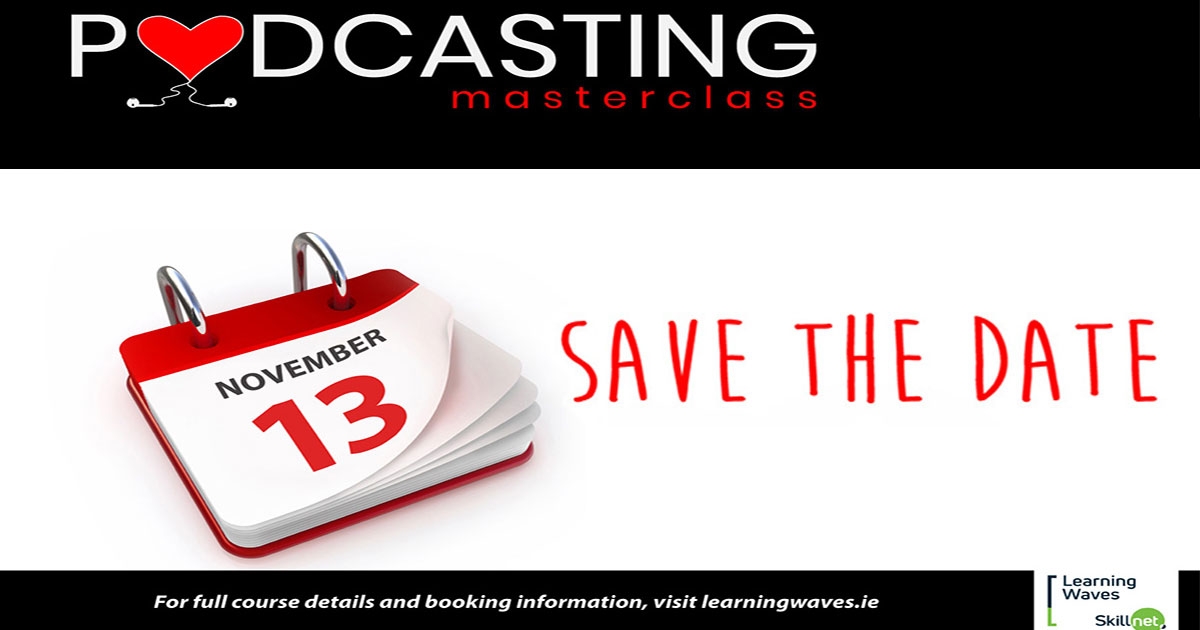 The speakers and running order have been finalised for our podcasting conference. Taking place in The Spencer Hotel, Excise Walk, IFSC, Dublin 1, this promises to be an informative, entertaining and engaging event. Places are limited, so early booking is essential. Patrick Haughey from Haughey Media is your facilitator for the day.  This event is FREE to Learning Waves Skillnet members but a FEE for non-members applies

Eoin McDevitt is a broadcaster with Second Captains, the Irish media company behind the critically acclaimed ‘Second Captains Podcast’, IFTA-nominated television show ‘Second Captains Live’ (RTÉ2) and the hugely popular radio programme ‘Second Captains Saturday’ (RTÉ Radio 1). A graduate of UCD and the DCU School of Journalism, Eoin is a three-time winner of the PPI Sports Broadcaster of the Year award.

Conor Reid is a teacher, writer, and podcaster from Dublin. He has a PhD in English literature from Trinity College and has published extensively on popular culture and fiction. He is the creator of Words To That Effect, a literary and cultural podcast, and recently performed the show live in Liberty Hall alongside the Radiotopia podcast The Allusionist. He writes about podcasts for the Bello Collective, an American site dedicated to curating, inspiring, and dissecting the world of audio. He is also the editor of PodStuff, the podcasts section of Headstuff.org. He’s on Twitter @cedreid.

Brian O’Toole is the producer of Motherfocloir, Taranoia, Juvenalia and a handful of other Irish podcasts. He is a key member of the HeadStuff Podcast Network. He also builds speakers and cycles long distances.

Corinne Podger worked as a radio, television, online and social media journalist for over 20 years, primarily for the BBC and ABC Australia. Since 2013 she has become one of the world’s best multimedia trainers, working with a range of journalism training providers including the BBC, Reuters, Journalism.Co.Uk, the World Association of Newspapers, and Radio Independent Group in the UK. She currently lectures in Digital and Mobile Journalism at the University of Melbourne in Australia, and runs training consultancies for reporters all over the world.

Suzanne Kane is a broadcaster who has worked for some of the most prominent radio stations in the country. A regular contributor on Newstalk, Today FM and various regional radio stations, Suzanne is also the voice over artist and is currently the female station voice for Today FM. Suzanne is a familiar face as one of the regular contributors Virgin Media One’s, Weekend AM. Along with her radio and television roles, Suzanne teamed up with top Irish comedian PJ Gallagher to host Dubland The Podcast, which has reached number one on the iTunes comedy chart, sold out live shows, with subscribers all over the world. As it reaches its third year, each episode is downloaded over 15,000 times every fortnight.

Cormac Moore is a comedian, radio presenter and podcast producer of the Project 10 podcast series. The series has topped the itunes charts and has explored a number of different issues, from drug legalisation to the dangerous of the call out culture online. He currently works for Dublin's largest commercial radio station FM104.

​Eamon Dunphy is an Irish media personality, journalist, broadcaster, author, sports pundit and former professional footballer. Earlier this year, Eamon left RTÉ after 40 years to focus on The Stand, a news, sport, and current affairs podcast with a mix of one-on-one interviews and football analysis.

​Mike Hogan is an experienced radio producer and presenter based in Dublin. He has worked in the radio industry for over a decade with some of Ireland’s most prominent radio stations, including FM104, 98FM, Newstalk and Classic Hits 4FM. Mike is also a podcaster, freelance journalist and voice over artist. Mike has been awarded for his radio work, including a PPI award for his popular Open Mic talk show on FM104, a PPI and New York International award for his work on The Niall Boylan Talk Show, 2 IMRO Gold awards for his work on ‘PJ and Jim in the Morning’ on Classic Hits, along with multiple nominations. He features on air with PJ Gallagher and Jim McCabe on Classic Hits each weekday morning from 6am, and also covers for Niall Boylan on the radio station’s talk show. Mike holds an honours degree in Sociology and Anthropology, a Masters in Media Studies from NUI Maynooth, as well as a Diploma in Journalism.

This blog is based on the Learning Waves Radio Matters Lunchtime episode with Ian McShane, executive chair of Behaviour & Attitudes, in conversation with Pe...

On Friday 1st October 2021, Learning Waves was presented with the Outstanding Achievement Award at the IMRO Radio Awards 2021.  The awards ceremony recogni...

The Broadcasting Authority of Ireland (BAI), in partnership with Learning Waves, has today (28.09.21) announced the ten successful candidates for the ...