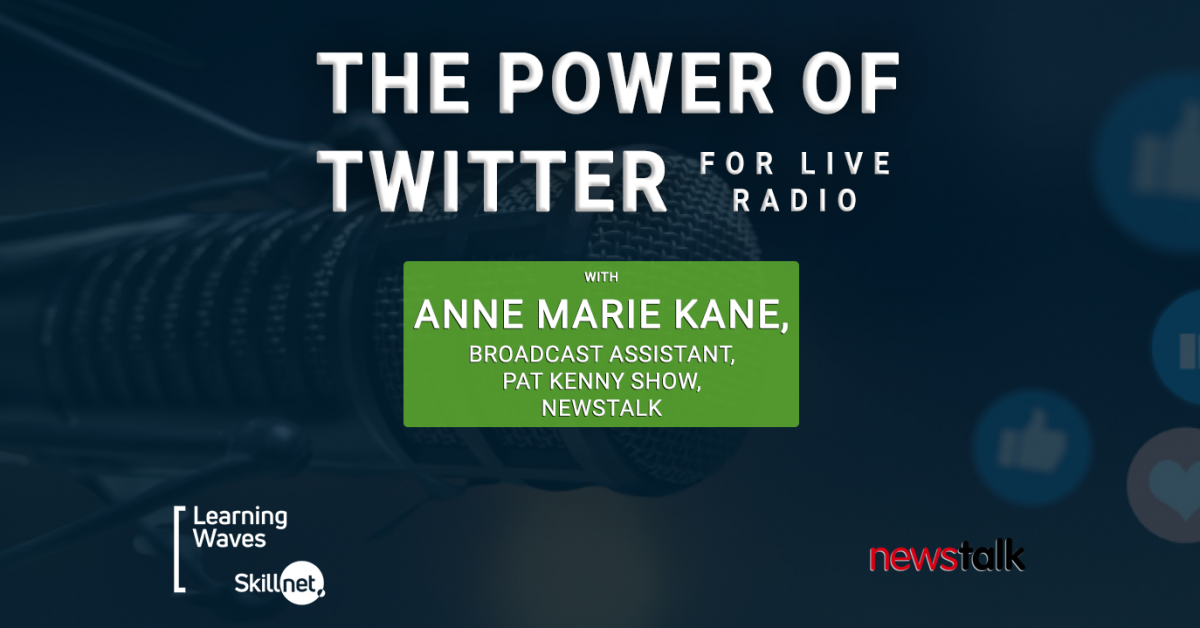 #WeLoveRadio Case Study - The Power of Twitter for Live Radio.

The Pat Kenny Show has been running on Newstalk since 2013 and is the stations’ flagship mid-morning news and current affairs programme running from 9am-12noon.

The show mixes strong current affairs analysis, human interest interviews with light entertainment stories and live music. Sharp, intelligent and insightful radio offering listeners a bit more in the morning. It boasts a daily listenership of 184,000. The Pat Kenny Show has been running on Newstalk since 2013 and is the stations’ flagship mid-morning news and current affairs programme running from 9am-12noon.

Anne Marie Kane is a Broadcast Assistant on the Pat Kenny Show on Newstalk. Along with guest coordination and producing show items into a series of daily podcasts, she is responsible for managing the show’s Twitter account which has just over 77,000 followers. The shows gains almost 200 new followers a week on Twitter and publishes over 100 Tweets a week with impressions in multiple millions.

Anne Marie wanted to upskill in social media and realised that the radio landscape was changing, and changing quickly. She found joining the Diploma in Social Media for Radio would be ideal way to do this.

Anne Marie used the opportunity of the course assignment to create a Twitter strategy for a show segment when Ireland was reopening from public health restrictions.

“Twitter really complements live radio and it offers me the opportunity to extend the conversation beyond our FM listeners. I love the interaction we get. The likes, comments and retweets give us a real sense of how the segment is going down with audiences”, Anne Marie Kane, The Pat Kenny Show.

Anne Marie wanted to extend the reach of the show across the country and used the opportunity to brainstorm a new feature for her assignment. So she worked on a concept of a camper van tour around Ireland with reporter Henry McKean.

“Twitter forms another conversation on top of the one we are having on-air”, Anne Marie Kane, The Pat Kenny Show

“Embrace the learning and take on a new course to enhance your skills in radio. Apply the knowledge in the Learning Waves course in real-time, that will build your confidence. The course will give you confidence in your own skills but also in your ability to pitch new ideas to producers and managers. Don’t be scared, take one social network at a time. I’ve mastered Twitter I feel confident to add more Pat Kenny Show content to the Newstalk TikTok and Instagram accounts.“ - Anne Marie Kane, The Pat Kenny Show.