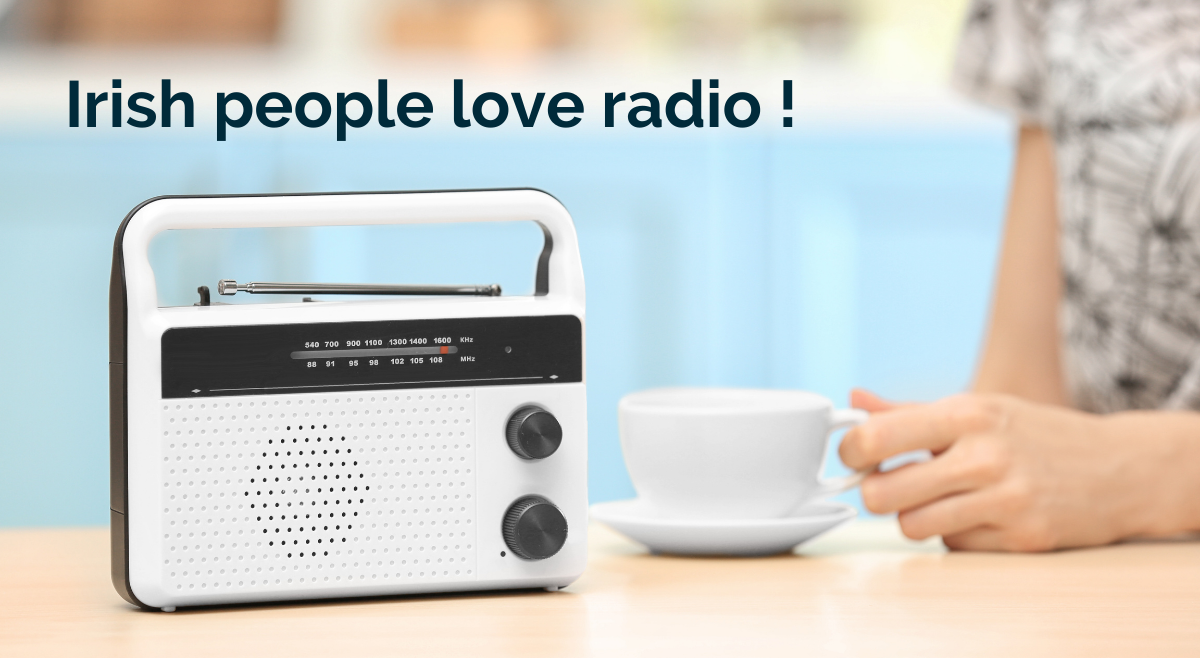 FM remains the dominant channel for Radio listening in Ireland.

The latest JNLR report, Radio in a Digital World, February 2021, shows that Irish radio remains an FM affair despite the advent of multiple digital devices and apps now available in the market.  The report shows that the time spent listening through the FM band is at about 15 times higher than the time spent consuming live Irish radio through digital methods.

FM accounts for a total of 12.5 of the 13.3 million hours a day Irish listeners collectively spend “tuning in” to Irish radio stations.  Whether they are tuning in for, news, sport or music, 3.2 million Irish people tune into radio everyday. The report found that radio engages a massive proportion of the population, 81% of the 15+ population on a daily basis.

The numbers listening to radio are second only to TV viewing and significantly greater than those engaged with social media, viewing video on demand or listening to music on Spotify. Daily listening to Spotify has increased but levels remain particularly lower than that for radio, even among younger audiences.

Radio listening through digital devices is growing slowly but steadily, up from 7.2% in 2015 to 8.4% in 2020.  Among the 15-24 age cohort, the most used digital device to listen to radio on a daily basis is the mobile device.  The dominance of FM in terms of listening time is somewhat explained by the fact that people who listen through FM car radios or traditional home sets tend to do so for longer each day than people who listen through smartphones and other digital devices

Irish people have demonstrated, year on year, that they have an enduring relationship with radio.  During the first lockdown period in Spring 2020, research showed that listeners placed a significant level of trust in the information they were receiving from radio.  Radio achieved a trust score of 7.9 out of 10, similar to TV and significantly ahead of the dominant social media channels, Facebook and Twitter.

“Routines are very hard to break,” said Damian Loscher, managing director of Ipsos MRBI. “Around the edges, there are behaviour changes, but they are happening relatively slowly.”

Only 20 per cent of adults have downloaded a radio station app, according to the report. Among digital devices, mobiles are the most popular for listening to radio with a reach of 4.8 per cent, followed by PCs/laptops on 1.9 per cent, smart speakers on 1.7 per cent, listening through a TV set on 0.6 per cent and Digital Audio Broadcasting (DAB) devices on just 0.5 per cent.

Ipsos MRBI began tracking the reach of smart speakers for radio consumption in January 2020, and its research up until the end of September suggests 66,000 Irish people use such speakers for this purpose. Mr Loscher said he suspected they have since overtaken PCs/laptops for radio listening and that this will be confirmed once the face-to-face JNLR survey can resume post-lockdown.

Mr Loscher said digital had made only modest inroads in the Irish market, in part “because FM is so big”.

This stands in contrast to some European countries including Norway, which controversially switched all national FM radio to digital-only in 2017; and Switzerland, which is eyeing a complete switch to digital by 2024.