It truly was a night of celebration for the Independent Commercial Radio Sector on Friday 5th October 2018 as radio stations from the sector took 26 of the 40 Gold Awards on the night.  The night which was held in the Lyrath Estate in Kilkenny was a celebration of Irish radio and Chairperson of IMRO congratulated all of the award recipients on the night.  McEvoy said that each of the award recipients 'in their own way have made an indelible mark on the broadcasting sector in Ireland and they rightfully deserve to be honoured by their peers on the special evening'.

Tom McGuire, Chairperson of the Radio Awards said that, 'the night was a celebration of the creativity, innovation and variety of Irish radio.  The quality, appeal and professionalism of all nominees is a fitting recognition of our audio island and our wonderful listeners'. 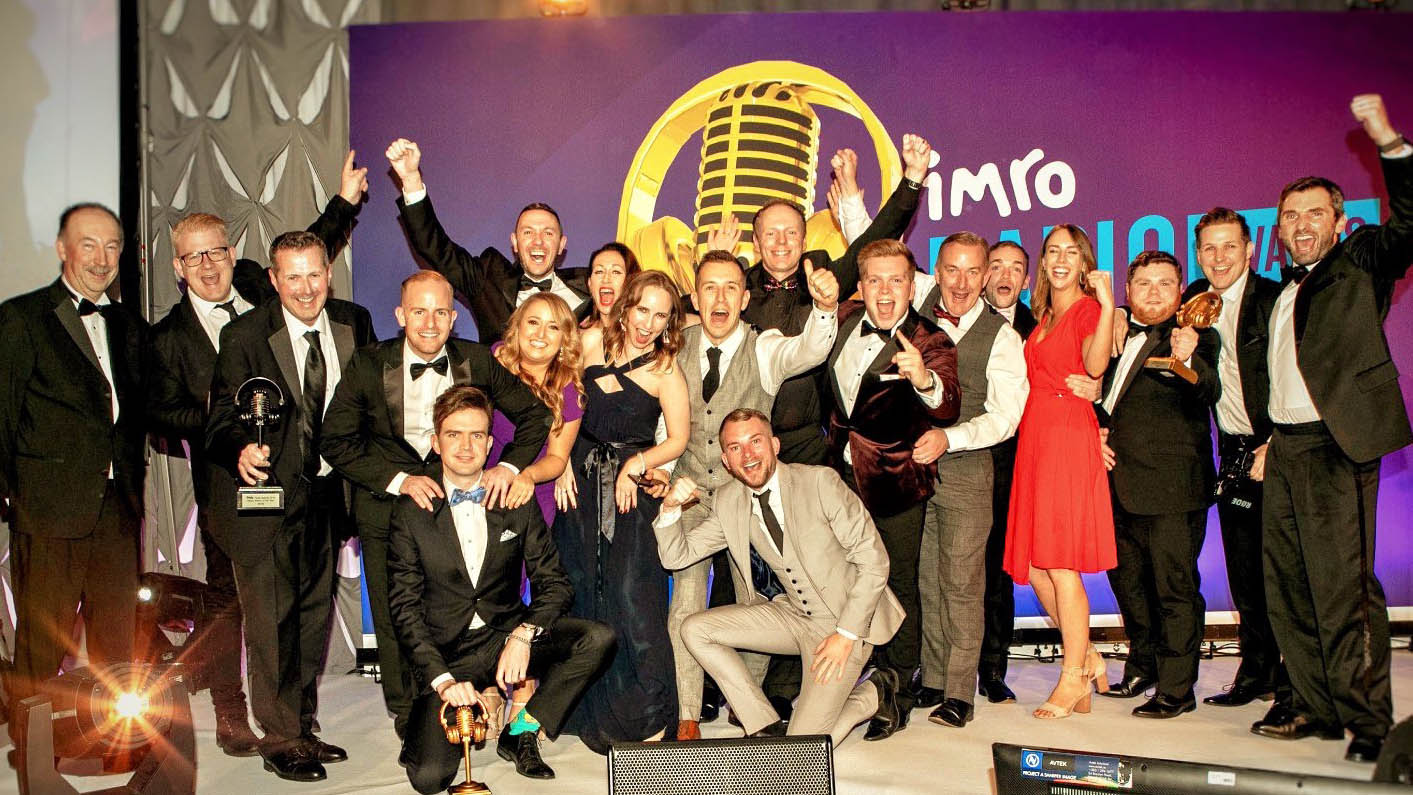 Radio Nova were celebrating when they took Gold in the Station Imaging category, a category dominated by the Independent Sector with 98FM taking Silver, while FM104 took home the Bronze in this category.

The Communicorp Group of stations continued their celebrations as The Big Ride Home with Dara Quilty from Spin 1038 took Gold in the General Music Programme category, followed by Gold for 98FM in the New Irish Music/Musical Talent category for their Totally Irish programme.  This was further added too as the News Bulletin of the Year was won by 98FM followed by Gold for Today FM in the News Programme Full Service category.  Pat Kenny who was recently inducted to the IMRO Hall of Fame further added to the groups awards as his show picked up Gold in the Current Affairs Full Service category.  The Specialist Speech Programme Gold Award went to Newstalk for Futureproof - Enemies of the State.  98FM picked up a further Gold in the OnAir Competitions/Promotions category for their Best of Dublin Awards.  Mario Rosenstock and the team at Today FM picked up Gold for Entertainment Inserts and Emily Owens and Carolyn Goulden were on hand to pick up this award.  Futureproof from Newstalk picked up Gold in the Innovation Category.

Gold in the Magazine Programme of the Year went to Ann Marie Kelly for her Open Door Programme on Midlands 103.  Kelly beat off competition from the Ray D'arcy Show and Plan B on Spin 1038 to take Gold for the Magazine Programme of the Year.  The crew from Castleforbes Street were celebrating again as Classic Hits 4FM took Gold in the Community/Social Action category for their Classic Hits Wish Week.

In the Wireless group, Limerick's Live 95FM took Gold for their programme on Remembering Dolores in the Local/Regional Current Affairs Category.  Midlands 103 took Silver in this category for Midlands Today, while South East Radio took Bronze for their Morning Mix AntiSocial Behaviour programme.  Corks 96FM won Bronze for their Giving for Living Radiothon in the Community/Social Action category.  FM104 scooped the Bronze in this category for their Aslan Special on the Strawberry Alarm Clock. Corks 96FM further added to their tally as they picked up Silver in the Interactive Speech Programme category for the Opinion Line.

Tommy Walsh from Newstalk took Gold in the Newcomer Category where Jaz Keane from Spin 1038 took Bronze.  After almost 30 years on the air PJ Coogan from Corks 96FM took Gold for Local/Regional Speech Broadcaster of the Year.  Will Faulkner from Midlands 103 took Silver while Shane Beatty from KFM took Bronze in this category.  Sean Moncrieff from Newstalk took the award for Speech Broadcaster of the Year Full Service where he beat off competition from Stephen Nolan in BBC Radio Ulster who took Silver and John Toal from BBC Radio Ulster also who took Bronze. 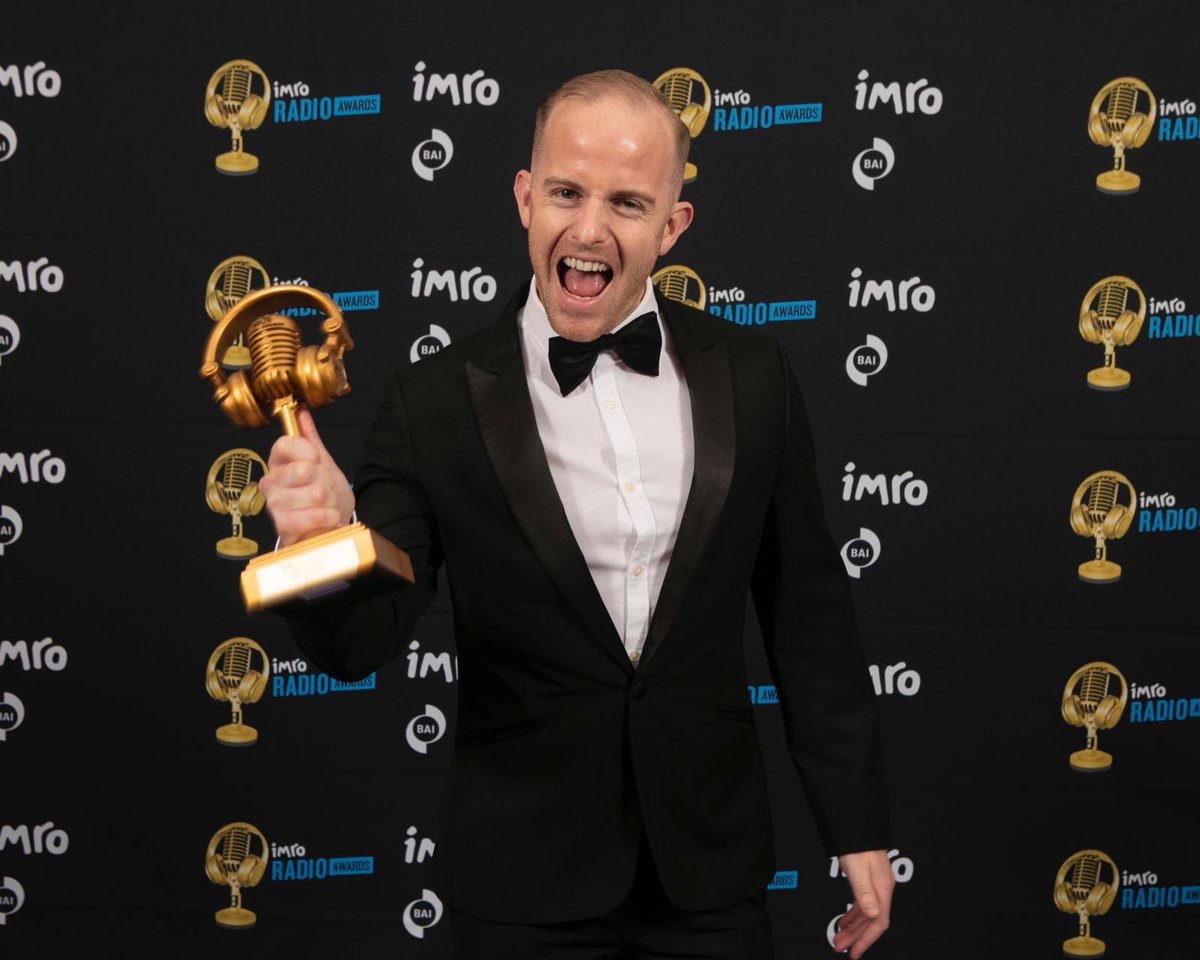 r of the Year Full Service.

Brendan O'Loughlin from 98FM(pictured right) beat off competition from Seamus McKee from BBC Radio Ulster and Audrey Carville from RTE Radio 1 to take Gold for News Broadcaster of the Year.  Brendan took to Twitter to say he was 'beyond thrilled to win News Broadcaster and News Bulletin of the Year'.  Brendan was celebrating on the double as the Newsroom in 98FM took Gold for News Bulletin of the Year.

Specialist Speech Broadcaster of the Year went to Ann Marie Kelly from Midlands 103 who had already picked up Gold for her Magazine Programme.  Kelly beat off competition from BBC Radio Foyle and BBC Radio Ulster to take home the Gold.

There was lots of celebrations from the team at Beat 102-103 as Dave Hammond took Gold in Radio DJ of the Year and his colleague Darren Rice took Bronze in the category with Tracy Clifford from RTE 2FM being sandwiched in between the boys from Beat 102-103 to take Silver in this category.  Dave took to Twitter to say, 'i just won best irish radio DJ what in Gods name just happened, i am still shaking'.

The Music Broadcaster of the Year category belonged to the stations from Leeside as Ray Foley from Corks Red FM took the overall Gold prize and KC from Corks 96FM took Silver while sandwiched in the middle was Fergal D'arcy from Today FM.

The above awards come a week after Margaret Nelson from FM104 and Dublins Q102 and iRadio's Willie O'Reilly were inducted into the IMRO Hall of Hame for their contributions to the sector over the last 30 years.

The IMRO Radio Awards celebrate the best in Irish radio broadcasting and recognise those who have made contributions over the year.

The judging panel, who listened to over 275 hours of entries, is comprised of a panel of 90 industry experts and adjudicate over 37 different categories.

Congratulations to all our members who were winners on the night and here's to continued broadcasting success to all of you.