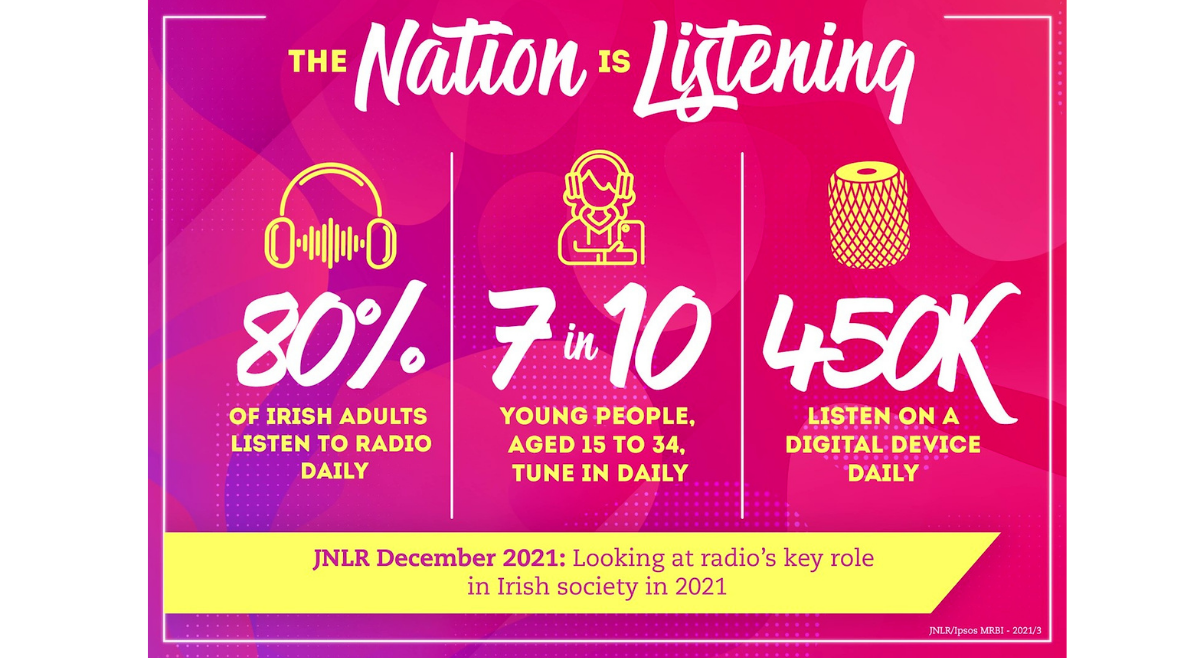 The results for the latest Joint National Listenership Report (JNLR) for the period October 2020 – October 2021 were published on the 8th December 2021.  Overall the figures show success for a number of commercial radio stations. Across the country, 80% of Irish adults listen daily, 7 in 10 adults age 15 to 34 listen daily and 450k listen on a digital device daily.  Below is a snapshot of how some of the stations performed around the country.

Ireland’s Classic Hits has broken through 300,000 for the first time with 309,000 weekly listeners and now has 158,000 daily listeners, with 5.2% market share in the multicity area. It’s the first time the station has broken through the 300,000 weekly listeners and 5% market share levels. The ratings are the highest the station has achieved in its 12-year history and cover the period October 2020 to October 2021.

CEO Kevin Branigan, said, “We’re delighted by these listenership figures today. We’ve made considerable developments to our programming output over the last 8 months and it is gratifying to see this significant positive response from listeners throughout the multicity area.”

In the Kingdom, Radio Kerry remains the Kingdom’s favourite radio station with 89,000 listeners tuning in daily.  The station has the highest figure among local stations for solus listeners, listeners that listen to their local station and no other station.  General Manager of Radio Kerry, Fiona Stack, "thanked listeners for their continued loyalty to the station and advertisers for their continued support.  She added that hopefully the last year has shown the valuable role local radio can play in providing trustworthy local information, entertainment and companionship for listeners, and in showcasing local businesses and services during challenging times for the county".

South East Radio recorded its highest ever listenership figures in the history of the radio station with 75,000 adults or two out of three people in Co. Wexford tuning in every week.  The stations Managing Director Eamonn Buttle said, "the latest listenership figures show our audience and advertisers continue to be extremely loyal to South East Radio.  Mr. Buttle says the figures come as South East Radio recently developed and expanded its news & current affairs team, and invested in state of the art digital studios".

In the Midlands, Midlands 103 was also celebrating its highest ever listenership with 73,000 adults tuning in to the station every day.  Head of Music Roy Jennings said "its great to see so many people tuning into Midlands 103".

CEO of iRadio, Mark Cunning had this to say on the recent figures, "The disruption of the last 18 months has definitely had an impact on listening habits and behaviours. While I'm delighted our listenership across our 15 county region has held firm; We've seen our listening day start later, with peaks shifting to later in the broadcast day. Where we've seen a small decreases at breakfast and drive, our mid morning and lunchtime slots have recorded notable gains. Despite the movement of numbers, it's still obvious that radio remains an integral part of our day to day lives in Ireland".

Bauer’s Today FM is celebrating a seven-year high, with over 900,000 listeners weekly (911,000) and recorded a market share of almost 9% (8.9%). Today’s results now position Today FM as the 2nd most listened to station in Ireland on a daily basis.

The Ian Dempsey Breakfast Show maintained its leading position as the biggest breakfast show on national commercial radio with an audience of 178,000 (-1,000 YoY). In mid-morning, Dermot & Dave have smashed the 200,000 mark drawing in a listenership of 205,000, their biggest ever audience. The past year has seen their show welcome 22,000 new listeners making them the most listened to show in that time slot on commercial radio.

Dermot Whelan commented: “We are so excited by these figures that show that more people than ever are enjoying our show. It has been a very tough couple of years, and we try every day to lighten people’s mood and bring them some laughs and support with our show. A heartfelt thank you to all our amazing listeners who make the show the success it is”

Mairead Ronan leaves Today FM on a high as her lunchtime audience grew by 33,000 over the past year to hit a peak of 136,000. Mairead announced recently that she is bidding ‘farewell’ to Today FM at the end of the year to spend more time with her family. Fergal D’Arcy also celebrated a bump in audience figures – up 7,000 to 132,000.

The Last Word with Matt Cooper increased its listenership by 18,000 over the past 12 months, now broadcasting to a drive time audience of 170,000. Matt Cooper said: “The numbers suggest to us that we’ve managed to strike the right tone and balance with our Covid coverage but also that our conscious effort to offer listeners a wide variety of other things on each day’s show that have nothing to do with Covid has really appealed to them.”

James Brownlow, Managing Editor, Music & Entertainment, Bauer Media Audio Ireland commented: “This is a huge result for Today FM and a performance that’s testament to the super content developed by a highly talented and committed team, the best music and the most entertaining personalities on Irish radio. “Every day on air we say, ‘It all happens here’ and every day we make sure it does. I’m thrilled that our audience chooses to spend more time with us and that we continue to bring in new listeners – everyone’s welcome at Today FM!  “In 2021, we launched our big brand campaign and in 2022 I look forward to announcing a new lunchtime show for Today FM".

Newstalk has achieved an all-time high national prime-time Market Share of 7.1% in the latest results. The new figures show the station now has a weekly audience of 767,000 listeners. It is also the number one commercial station in Dublin with a prime-time Market Share figure of 12%. Newstalk Breakfast with Ciara Kelly and Shane Coleman has achieved an audience of 137,000 – up 17,000. The Pat Kenny Show has grown its audience by 28,000 listeners to 183,000 and Lunchtime Live with Andrea Gilligan has an audience of 112,000 – up 10,000.

Newstalk Managing Editor Patricia Monahan said: “We are delighted to see Newstalk make significant audience gains in the latest results.  It clearly shows there is a demand for talk radio that engages, entertains and provides a clear alternative to RTE Radio 1".

Live 95 has 101,000 listeners tuning-in every week, which is 61% of the people of Limerick City and County, or over 6 in 10.  Station Director of Live 95, Joe Nash said: “The power of radio in general is obvious from the official survey, showing that 85% of Limerick people are listening to a radio station every day, which is up from the already very high figure of 12 months ago".

Meanwhile, Tipp FM are up 17%, 9,000 new listeners across the county compared to last year, while in WLR FM Damien Tiernan recorded an average quarter hour of 25% which is a record score for any station in Waterford. Jennifer Long, Editor of Deise Today said they were "delighted with the results stating that there has been a huge reliance on news and current affairs to keep people informed during Covid 19.  She also pointed out that it is important to give people a distraction from time to time and the figures show that Damien and herself have got the balance right for their listeners".

« Back to Blog Posts