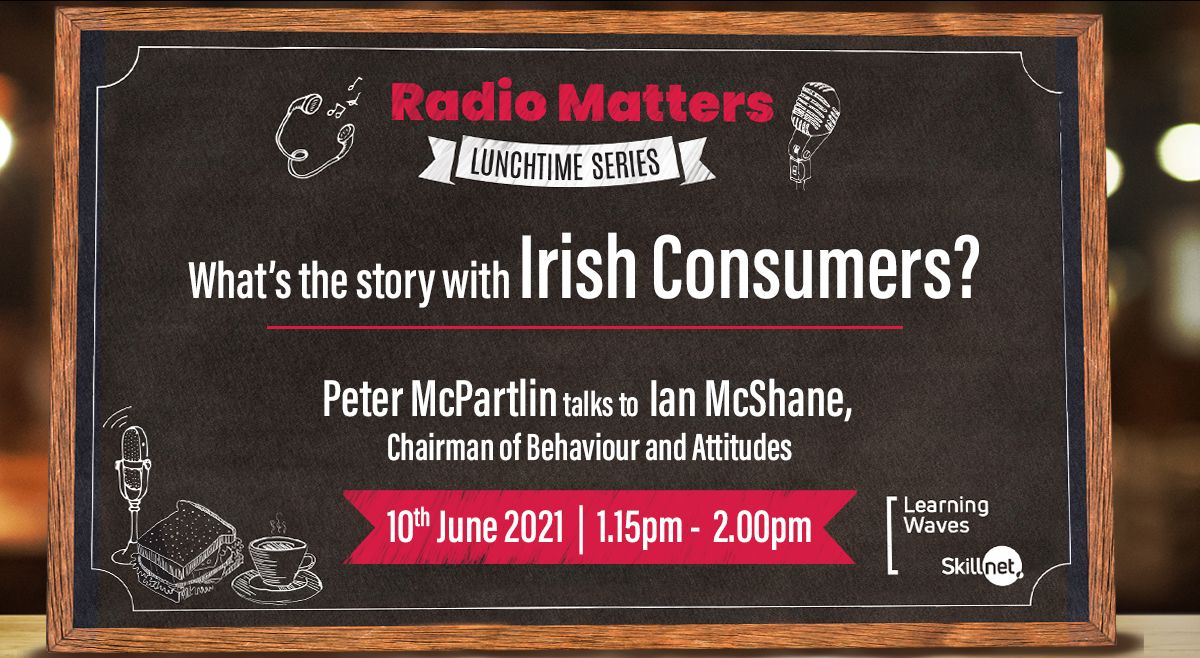 This blog is based on the Learning Waves Radio Matters Lunchtime episode with Ian McShane, executive chair of Behaviour & Attitudes, in conversation with Peter McPartlin, former chief executive of Today FM and chair of the IMRO judging category.

What’s the story with Irish consumers? Has COVID impacted consumer mood, and what are the key trends and themes that have emerged over the course of the pandemic? Most importantly, what impact is this sentiment having on radio stations and their clients and what should the industry be doing to ensure that revenue continues to come in?

The economy has taken a battering as a result of COVID and the associated lockdowns, business closures and ban on events and gatherings. Now that the economy is re-opening, it’s expected that people will begin to spend again – once given the opportunity to do so! Behaviour & Attitudes is one of the leading market research companies in the Irish market. Ian McShane is executive chair of the company, and has some great insights into what the future may hold for consumerism, especially with regard to the commercial radio sector.

Behaviour & Attitudes has spent a lot of time and energy tracking people's behavior and views during COVID. Using pre-pandemic research data, they’ve managed to create an accurate picture of the Irish consumer and how their mood has changed over the course of the last 18 months.

Ian said that ‘Behaviour and Attitudes recruited panels of people and got them to complete video diaries and so on. And then we've been laterally conducting research to try to tap into the extent to which people's behaviors that established themselves during COVID are likely to maintain post-COVID or not.’

Research indicates that consumer confidence in Ireland collapsed early last year with the onset of the pandemic – last April, it scored an almost rock bottom -91 on a scale that runs to -100. The last time we saw such a precipitous drop in consumer sentiment was when we went from a figure of plus eight in 2006, to minus 89 in 2009, just before the IMF and the EU rolled in with the bailout.

A common phrase at the moment is ‘there is money out there,’ but how true is this? Some consumers have built up savings over the past 12-15 months, while around a third of those surveyed by B&A say they actually have less money now. 26% report having more disposable income than pre-COVID times.

Ian says ‘seven in 10 of all the consumers out there told us recently that they are very conscious as to how they're spending their money nowadays.’

There are also concerns around inflation and salary reductions. A quarter of Irish workers who are currently in the workplace expect their salaries to reduce over the coming months, and this is leading to a level of nervousness among consumers.

According to Ian, the environmental agenda, unemployment and jobs was a concern. It's an even bigger concern now. Inequality is another issue that people have been preoccupied by. And our concern that COVID will only exacerbate because the gap between the rich and the poor, the haves, the have nots, the urban versus the rural dwellers and so on has only been strengthened, if you like.’

Ian believes that these facts can be viewed from the perspective of radio – which is tasked with developing compelling content that people are passionate about, and want to learn more about on an on-going basis.

Working from Home and its Impact on Radio

On paper, the movement towards working from home for many should be somewhat beneficial in terms of stoking innovation in the radio sector. The expected trend would be to see an increase in morning and day-time audiences, and an associated fall-off in drive-time listenership. Research shows 55% of those who’ve been working from home prefer it to the office setting. 76% want to work from home at least a few days a week from now on.

Despite the challenges posed by COVID, radio has the ability to hold its loyal audience through the provision of information, relevant content and entertainment – and Ian says the ‘self-care’ efforts being made by many Irish people due to the ongoing pandemic has provided a new opportunity for the sector. Ian says B&A’s research has shown a new openness developing, with Irish people becoming much more comfortable with discussing their mental health and how they’re managing. Radio has already tapped into this and used it to innovate and capture new audiences.

Ian referenced a recent study that has shown that ‘TV and radio were the two media that people were deferring to by a long shot for information, news, reassurance around what is happening here and abroad.’

E-commerce and Radio's Role in keeping it Local

52% of all adults say they have been purchasing more products and services online over the last year. B&A has found that certain categories benefited more from online shopping than others, for example, clothing, household goods and electronics.

However, Ian believes the physical shop is about to make a comeback: ‘Definitely psychologically, there's going to be a retrenchment back towards bricks and mortar shopping as people are looking for more real and meaningful offline experiences, even tactile experiences, touching, feeling, smelling stuff that they buy. But look, the net effect, I think it's common sense, the net effect has got to be that a lot of the online shopping behavior is going to stick. So we'll retrench back definitely from where we are now online towards bricks and mortar, but online will still be bigger and more prevalent than it already was.’

From a radio perspective, this is where the industry can support local businesses through the rediscovery of the importance of community.

According to Peter McPartlin, 'local stations around the country have always managed to outperform particularly the national stations, almost in every town and city around the country outside of Dublin. And I think, again, because they've tapped into that community feel, the issues that they talk about clearly are nationally related, but bring them down to a community on a local level as well.’

Ian belives that technology and the digital realm must also be considered by radio stations in a new way.  ‘This sense of discovery and curiosity that we spoke of has extended to the use of technology. Streaming has gone up again this year, compared to previous years, the consumption of podcasts, Spotify, all that type of thing. There are potential challenges and negatives, I guess, for the tradition radio industry in that, but surely there are opportunities with regard to disseminating compelling radio content across digital platforms.’

Listen to the full episode below.