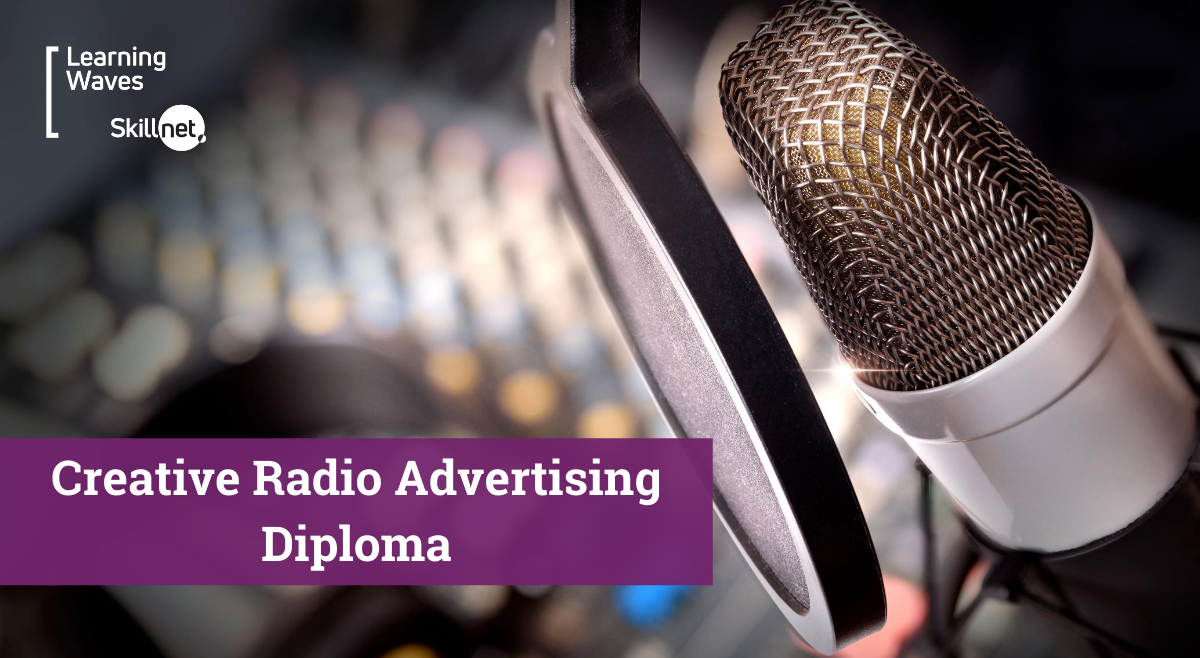 Learning Waves Skillnet is delighted to partner again with GoCreate Academy to deliver the Diploma in Creative Radio Advertising which is accredited by the London College of Music.  The network delivered the programme in 2017 and the course has now been updated to provide those working in commercial radio production.  The course aims to improve the creative advertising skills across the sector by focussing on the core areas of sound manipulation, copywriting, sonic
branding, communication and production. This course gives you the tools to create great radio commercials, for broadcast, online, social and aggregate/blended campaigns. In essence the course will show you :

The course consists of 8 modules which include extra video tutorials, live webinars, podcasts and peer support throughout your online learning. The modules that are included are as follows:

Creative Radio Advertising involves many different skillsets. This course develops understanding in each area through interactive workshops, online content and real-life case studies. At the end of this course, producers can submit two audio artefacts, then partake in an informal online interview to gain the University Award DipLCM - with the right to use those letters after their name.

Places are limited to 15 on the course and those who are interested in participating in the course can register their interest here.

Eugene is an award-winning Senior Copywriter, Creative Director, Group-head and Author. He began working at Saatchi & Saatchi London in 1980. In his 17 years there he went from junior copywriter to senior writer, group-head and a director of the company. In the same period, the agency went from medium-sized British agency to the biggest and most successful agency in the world. He went on to work around the world for McCann Erickson satellite, Amster Yard in New York, Saatchis in New Zealand, Publicis in Dublin (where in his head of copy role they became Ireland’s most awarded creative agency). Eugene now works for GoCreateAcademy, is an author and a board director with the international advertising and creative festival, the Kinsale Sharks - www.kinsalesharks.com

Peter is a co-founder of GoCreateAcademy. He was a concert pianist, won two Lloyd Webber Piano Awards and was the youngest ever examiner of the London College of Music. He worked for Roland (the electronic music manufacturer) and toured the world working with such luminaries as Madonna, Kenny Rogers, Leo Sayer and many others. He became head of production at Capital Radio Group, before setting up his own creative agency - delivering advertising campaigns & projects for companies like Samsung, Unilever, Coca-Cola and Vue Cinemas. He combines his musical, technological, research and scientific understanding as a global platform speaker and is a passionate philanthropist about online learning.

Susan Hickey is an award-winning media presenter, producer, author & entrepreneur. She’s worked across TV, Radio and online as a presenter
& interviewer around the world, including UK’s Channel4, Spain’s MobuzzTV and Ireland’s RTE - covering diverse subject matters from technology to finance. She is currently the host of GCTV Live. Susan is a pioneering entrepreneur, recently recognised by the Irish Government where President Michael D Higgins invited Susan to the Presidential House to receive an award as one of Ireland’s top female business leaders. She is the co-author and presenter of the world’s first academic qualification in Vlogging and is a platform speaker at media and educational events as far afield as Singapore & KL.

Richard is a highly experienced audio engineer, producer and technical facilities designer, lecturer and academic manager, Richard has worked in proaudio since 1988 as an expert-level audio recording, editing and mixing engineer. He has worked on several interntional high-profile complex audio projects with the likes of Vue Cinemas, Shell, Capital Radio, Sony and many Soho Mixing houses on international films and documentaries.