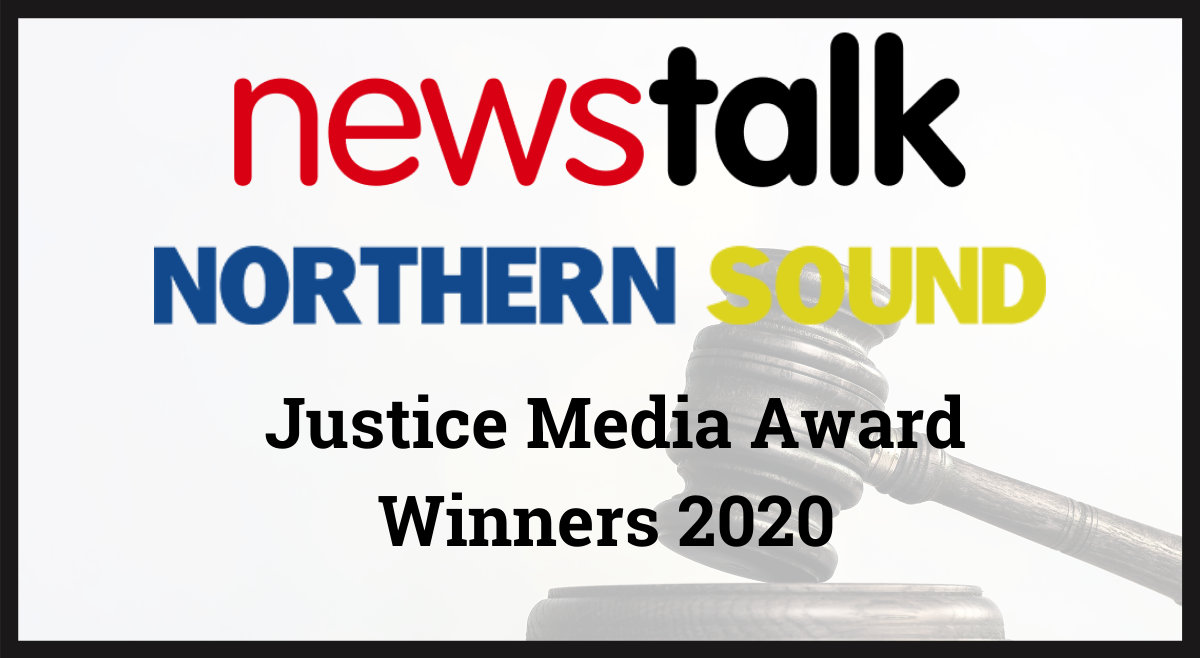 The Law Society of Ireland announced the winners of the 2020 Justice Media Awards this afternoon.  It was the first time in 29 years that the event was held online.  Michele O'Boyle, President of the Law Society of Ireland acknowledged the contribution of journalists and newsrooms across the country.  In addition to this O'Boyle complimented the industry on the outstanding response received during these challenging circumstances.

The Independent Radio Sector received two overall awards with a number of merits being awarded also.  Newstalks Court correspondent Frank Greaney took home the prize in the Court Reporting (Broadcast) category for his series of reports on the prosecution's case against Boy B in the Ana Kriégel murder trial.

It's Frank's third year in a row picking up a prize at the awards, with this year's judges highlighting his "signature balanced, listener-friendly style".

Commenting on his win, Frank Greaney said: "For a man who's rarely stuck for words, I'm struggling to find the ones to convey just how much this award means to me. Having my work recognised by the Law Society of Ireland has once again left me feeling truly humbled.

"The Ana Kriègel murder trial was the most difficult case I have ever covered. As a courts correspondent, you learn to leave your emotions at the courtroom door, but that was no easy task on this occasion given the circumstances of Ana's death and the harrowing details heard during the trial of the two boys who murdered her.

"The sensitive nature of the case and the reporting restrictions imposed due to the ages of BOY A and BOY B added an extra complexity and challenge to our daily coverage. "It feels bittersweet to accept such an accolade on the back of such tragedy, but I think this trial in particular highlighted the importance of the work we do under very difficult circumstances and the Justice Media Awards is a wonderful platform to shine a light on that work."

Meanwhile, Andrea Gilligan took home the award in the Broadcast Journalism (Radio / Podcast - National) category for her look at the law and anonymity - her second year in a row picking up a prize.
The judges praised the piece as an "excellent examination of the legal meaning of anonymity and its controversial application in the most distressing criminal cases".  In addition to this the judges commented that 'this reporter has created a unique space where experts can skillfully address complex topics and answer questions her audience needed answers to'.

In the same category, Newstalk's John Casey and Pat Kenny were awarded a merit certificate for their report Behind the Walls of Mountjoy Prison.

Meanwhile in the Newcomer of the Year, two merit certificates were awarded along with the overall award.  One of the recipients of the merit certificate was Northern Sound’s Aaron McElroy who was praised for his work reporting on Court sittings across the region.

Congratulations to all the winners of the Justice Media Awards 2020.