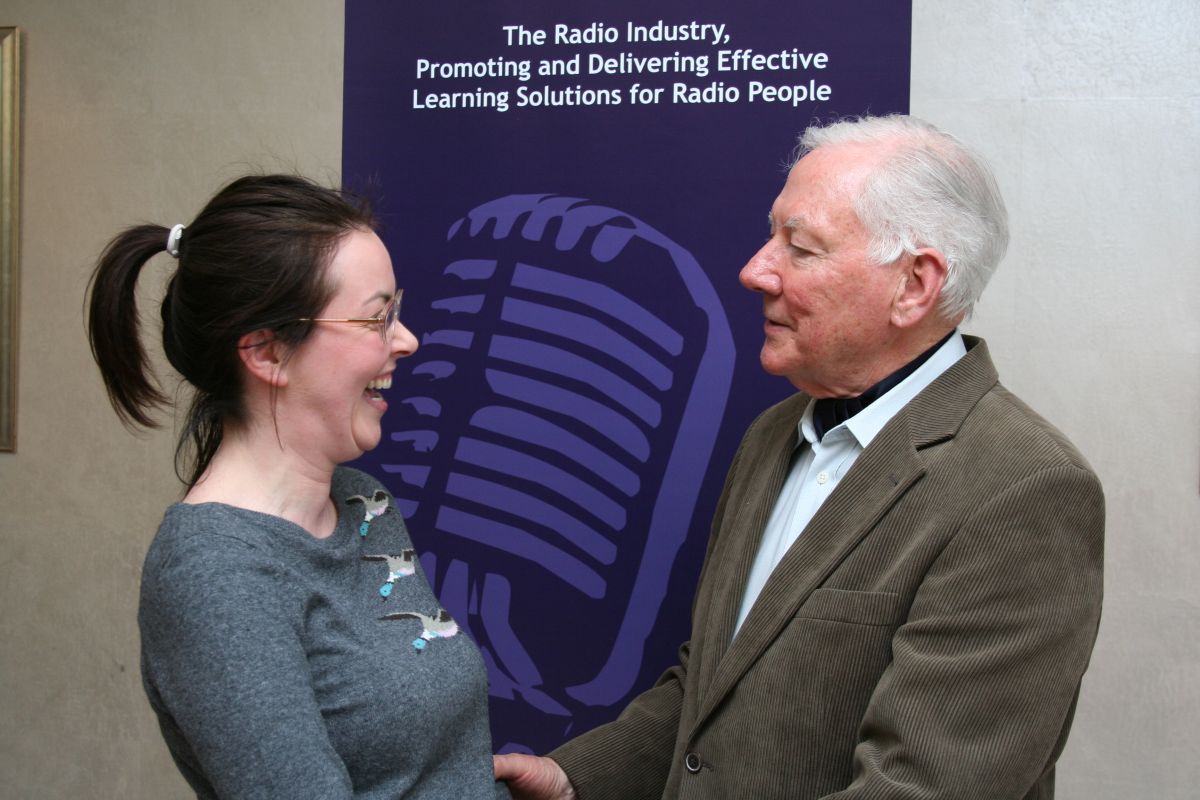 On Monday, November 4th 2019, Ireland lost one of its most recognisable, influential and comforting voices. Over the course of his decades-spanning career in radio and television, Gay Byrne conducted thousands of interviews with a vast array of subjects, from politicians to actors, authors to activists. In his 37 year tenure as host of The Late Late Show, these interviews helped shaped the Irish public’s opinion and got them talking about previously taboo subjects such as abortion, contraception, homosexuality etc. His smooth, reassuring voice was instantly recognisable and his efficient yet amicable and empathetic interviewing style is very difficult to replicate. Learning Waves Skillnet invited Gaybo to the G Hotel in Galway in April 2012, where he entertained and educated a group of radio professionals on the art of interviewing. Following the event, Learning Waves chairperson, Bernadette Prendergast interviewed him in an online masterclass.

When asked the qualities of a good interviewer, Gay stressed the importance of listening to the subject: “I’ve always thought the primary function of a good interviewer is to listen. And I think in order to do that you have to make eye contact with the interviewee and not bother during the interview with any messages that may be coming in from the screen. I’m talking now in the context of live radio. The messages are coming in on the screen all the time, and I find that so many interviewers are more engrossed with what’s happening on the screen rather than what I’m saying in answer to their question. And this thing(pointing to his phone), which is a new piece of technology, seems to me it takes priority over everything else and I think that’s a pity.” He advised interviewers to always listen to the subject rather than thinking about your next question, let the interview flow naturally. He also encouraged interviewers to let the interviewee answer the question in silence: “Avoid the temptation of interjecting in anyway. Either saying ‘yes’ ‘yes’ or ‘uh huh’ ‘uh huh’ or ‘I understand’. It is far better if the interviewer stays completely silent, if they can master that art, until the interviewee has answered their question.”

Bernadette then asked Gay about the importance of preparation in the execution of a good interview. Gay emphasised the importance of research and working in tandem with the researcher to develop a list of questions for an interview while also stressing the necessity for spontaneity: “In order to retain spontaneity and in order to retain surprise and to retain interest it’s not necessary to go through the interview beforehand. In other words, I can’t imagine ever rehearsing an interview in any way. The researcher may have gone over the interview with the subject, but not rehearse the interview. At least, I would never rehearse and interview with anybody because I want to be surprised by the interview. I may have an inkling that I know the answer or I may have an inkling of the general direction, of what happened then, but I still want to ask them and find out for myself.”

On the aim of an interview, Gay said that eliciting information is the goal of every interview, yet the type of interview will dictate the approach: “If it is a political interview it can be harsher and more direct than what we call a soft interview. If it is somebody telling a story… the object of the exercise is to hear that story. And they must be given room to expand and think about their role in the story on air and think about their own way of telling because that’s the whole point in having them on. A political interview or a business interview is rather different and you have to decide in advance what the purpose of that interview is and the direction of it.”

Over the course of his 60 year in radio and television, Gay interviewed many famous and respected figures, including personal heroes of his. When in the presence of people like this, interviewers can be overcome with awe and intimidated by their guest. Here were Gay’s tips on how to combat those feelings: “It is no harm showing them deference and respect and all of that. But I don’t think you can allow yourself to be overawed by them because they’re in your house and they’ve agreed to come in, and they’ve agreed to be interviewed. I think you’ll show them if they are a hero/heroine of yours, I think you will show them naturally in your voice. You don’t have to do anything special. The listener will know and you will show through your questions and your attitude and your voice that you respect these people. And there’s no harm by starting the interview by saying “You were always my hero. You were always my heroine. You were always someone I respected and admired from afar. And I’m just overcome with meeting you today.” And that takes all the sting out of that deference and so on. You can now go ahead and do the interview.”

Some of the most famous interviews in Gay’s career have been deeply emotional ones, subjects telling personal, sometimes dramatic stories, even breaking down on air. When asked on how he handles these kinds of interviews, Gay said: "I think you should bear with the moment. It has happened to me a couple of times where I been overcome with sadness alongside the person I was interviewing for various reasons… And I don’t mind that because I think that you allow yourself to be overcome. The minute there is that indication of a sob or a filling up or of people become tearful or people breaking down, the listener will pick up on that very very quickly. Immediately. And there is no harm in that silence, in that sympathetic, empathetic silence because they know what it’s about. And if they hear a sniffle, if they hear a tearful moment, they will certainly not criticise you in empathising with your subject. If anything you will gain their sympathy and they will realise that you are a human being and you’re listening to the story and you are overcome by the story and you are as much engrossed in the story as they are. And that’s certainly to your benefit and not your discredit."

Finally, Bernadette asked Gay who is favourite interviewers were. His first answer was Vincent Brown. “He is special and he is different and he is a one off and he stands alone and he is prepared to fight to the dogged end to get an answer to his question. And he doesn’t care if you think he’s rude and he doesn’t care if you think he’s hostile and aggressive. He just doesn’t care what your opinion is, he’s doing his job and I think he is outstanding in that regard. I also think that of the “old timers”, I think Michael Parkinson was splendid and outstanding and had this thing of asking a question, listening to the answer, not thinking of the next question and then picking up on a casual remark during an answer and going off on a tangent, which I love to do myself. I love in the course of an answer where somebody said something which I was not quite expecting about the day they fell out of the airplane, which never came up in any piece of research or anything and you’re suddenly hearing it for the first time. And you follow that lead to see where it goes, and then come back to the general body of the interview. They would be people that I would admire.”