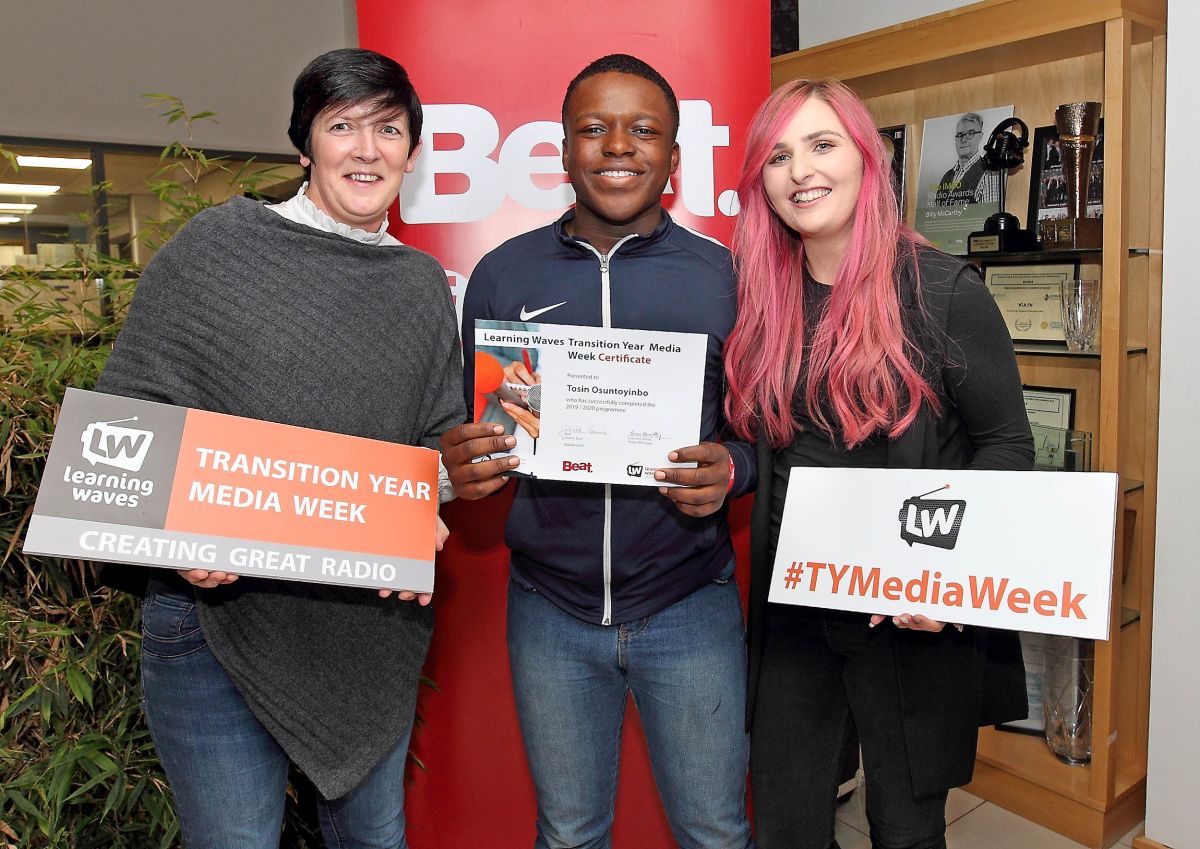 In October 2019, 15 Transition Year Students from across the South East completed a one week media course focussing on  Media Literacy at Beat 102 103. The new TY Media Programme was coordinated by Learning Waves and supported by the Broadcasting Authority of Ireland. Students from all five counties of the region spent the week getting hands-on advice from Beat radio presenters and other experts in the industry.

“the future is looking bright for broadcasting in Ireland.  It has been a pleasure working with all fifteen students.  They’re a seriously talented, confident bunch of Transition years who put huge amount of thought and creativity into the tasks assigned to them.  The result is they have worked together to produce an engaging two-hour programme that will encourage their peers to think about how they engage with media and interact with others in life in general.  I was particularly pleased to hear them all say at the end of the week that they were converted super loyal Beat fans! They said they have a new-found respect for radio broadcasters and the work we do to entertain 158,000 people weekly. I’m very proud of all they’ve achieved this week and look forward to welcoming back some of them to full time employment in this vibrant sector in the future.”

Students got the chance to create their own radio show, which was broadcast on the Takeover on Beat 102 103 on Monday night 21st October 2019. The students spent the week preparing their final product which included interviewing lead singer with well-known Irish band The Blizzards.  They also took to the streets of the South East to interview the public for the segment.

“In a changing technological, media and social environment, the need for Media Literacy has never been more important.  Media Literacy is the key to empowering people with the skills and knowledge to understand how the media works in this changing environment.  It will allow people to interrogate the accuracy of information, to counter unfair and inaccurate representation, to challenge extremist views and, ultimately to make better informed media choices.  Against this backdrop and in line with the BAI Media Literacy policy, Learning Waves is delighted that these students took part in the Beat TY Media Week Programme.  Some of these teenagers could go on to become the future content creators, broadcasters and producers of media and the provision of media literacy skills to them will ensure that they will make informed choices and decisions about content they broadcast on a range of platforms. Learning Waves, along with Beat 102-103 is so impressed with the work produced by the students over the last seen days and have no doubt some will be future broadcasters for the sector.”

All 15 students were presented with a certificate of completion following their week of work experience at Beat 102 103.

A total of 15 radio stations across Ireland are taking part in the programme between now and March 2020. The programme is coordinated by Learning Waves and the Broadcasting Authority of Ireland.

More information can be found on www.learningwaves.ie