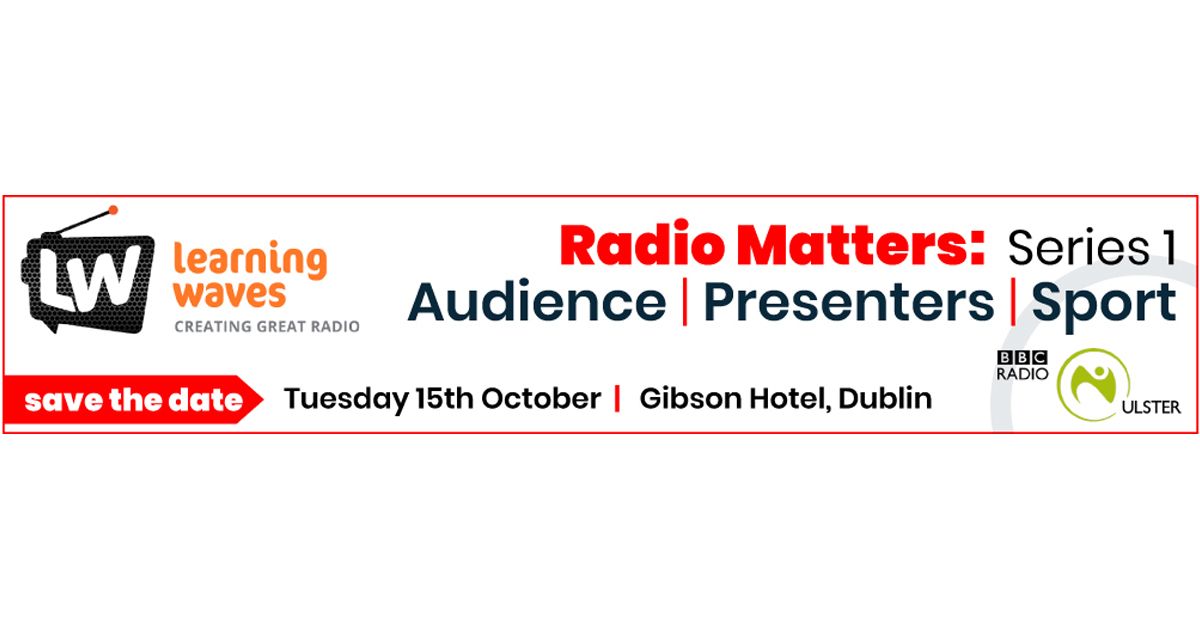 Learning Waves, in partnership with BBC Belfast, is delighted to announce the first of it's 'Radio Matters' Series.  The Radio Matters Series will aim to explore the challenges and opportunities that exist for radio in 2019 and beyond.  The series will take the format of being panel and discussion led and will allow speakers and delegates to interact in a way that will allow for exploration, sharing of ideas and opening of opportunities across the sector.  Each session will be facilitated and will be 45 minutes in duration.

The first Radio Matters series will take place on October 15th 2019 in the Gibson Hotel in Dublin from 11am to 3pm.  The first series will look at the following :

The series will feature a range of speakers from the BBC along with speakers from national, regional and local stations in Ireland.  The speakers include :

Wendy Austin is presenter of BBC Radio Ulster's Inside Business programme. One of Northern Ireland’s best known journalists and broadcasters, in a career spanning more than 40 years she has worked in local and regional newspapers, commercial radio and for the BBC, both on radio and television, in Northern Ireland and GB. Wendy will share with us her radio story and will talk to us about the challenges and opportunities for presenters in radio today.

Valerie Wheeler is a co host on the SPIN South West breakfast show Fully Charged and has been on air in that role since September 2018.  Previous to this she worked in Red FM in sports programming and currently contributes to local and regional coverage for Off the BALL .com and Newstalk focusing mainly on GAA. Valerie presented the Liberty Insurance All Ireland Camogie Championship, the Littlewoods Ireland Camogie National League and the live coverage of the AIB Club Championship during 2019. Valerie is the SPIN South West sports champion for 20x20 campaign and a great all round promoter of women in sport in front and behind the mic. Her passion is GAA and her county of origin is Cork! Up the Rebels!

Orla Bannon is a multi-platform sports journalist who has covered major sporting events for national newspapers, radio and digital outlets for over 20 years. She is a BBC Radio Ulster sports broadcaster, presenting several sports programmes for the station, and is also a regular guest on RTE Radio 1’s ‘Today with Sean O’Rourke’ programme. Orla will share her insights into the world of sports broadcasting and how we can encouage more female sports broadcasters to get involved in the industry.

Ruth Scott is synonymous with radio in Ireland. After almost 20 years presenting a variety of shows on RTE 2fm, Ruth has moved to Radio Nova and is now also a presenter on Virgin Media One (formerly TV3).  She is an event MC & facilitator. Her radio repertoire has expanded to include much of this line of work as well as voice overs and even wedding and funeral ceremonies.

Jacqui Hurley is a regular face and voice across RTE’s sports tv and radio coverage.  She started off her career in local radio in Live 95fm in Limerick, before joining RTE in 2006. She became the first ever female presenter of Sunday Sport on RTE Radio One in 2009 and in 2018, she was the first ever female to anchor RTE’s FIFA World Cup coverage on television.

Siobhan McMenemy is the Audience Research Manager for the BBC's Youth Radio Networks (BBC Radio 1, 1Xtra and Asian Network) and BBC Sounds. Her research aims to understand the attitudes, listening behaviours and media habits of their young audiences, with particular focus on audio consumption. Siobhan has over 10 years’ experience in media market research and has previously worked with BBC Radio 2, BBC Radio 3, 6 Music and BBC Music.

Passionate about all things media, Sasha Hamrogue began her career as a producer in MTV in New York, which led her to her current role as Head of Digital for the Wireless Group here in Ireland. Sasha heads up a digital creative team that creates digital products including original video, podcast and social content for a social and online audience of over 1 million people. As an engagement advisor, Sasha loves to develop engagement opportunities at each touch point. Personally, Sasha used her love of social media to create Mamas Working 9-5 (And Beyond!), a Facebook group for mothers looking to strike a better family and work balance, which has over 1,800 members to date. Sasha also co-hosts Grief Encounters, a weekly podcast which looks at tales of life, love and loss.

To book a place at this event go to : https://www.learningwaves.ie/trainingcalendar