Rory Hamilton, founding partner and ECD of the Dublin based creative agency Boys and Girls and President of the Institute of Creative Advertising and Design(ICAD), joined us at Radio Days Ireland 2018.  Rory has won more than 100 creative awards both nationally and internationally including awards at D&AD, Epica and One Show. Rory joined us to share with us his 'ten simple steps to better radio advertising'.  By way of introduction Rory said that his passion is 'to get people to produce better radio and that radio is a writers paradise'.  Rory described radio as the 'playground for creatives', because nothing can stop you doing really good work.  He believes that radio is best at 'getting under your skin', it can be 'funny', 'dramatic' and extremely 'powerful'.  He compared it to a motorbike rather than a truck and cautioned the audience 'not to throw too many messages in at once'.  Radio should have one message, clearly delivered and cleverly executed.  In concluding his presentation, Hamilton said that 'radio is a powerful medium pound for pound', 'it gets under your skin', 'it changes people's minds and it makes brands'. 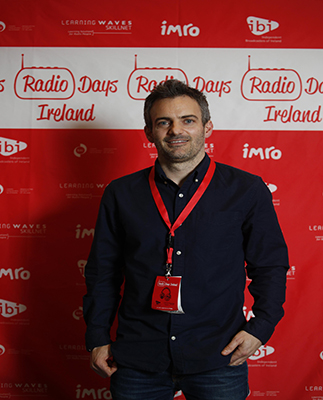 Rory's full presentation can be heard by clicking here.