News Why Radio is really worth fighting for - with Helen Boaden

Why Radio is really worth fighting for - with Helen Boaden.

Helen Boaden spent 34 years of her extremely successful career at the BBC, beginning at BBC Radio Leeds and ending on the BBC Executive Board. Her love of broadcasting began with a stint on student radio at the University of Sussex. Helen then went on to complete a course in radio journalism and after finishing top of the year, dipped her hand in local radio which in turn, led her to the BBC. We were lucky enough at Radio Days Ireland to hear from Helen first hand as she gave a genuine and insightful talk on her own career and what she believes to be the future of radio. 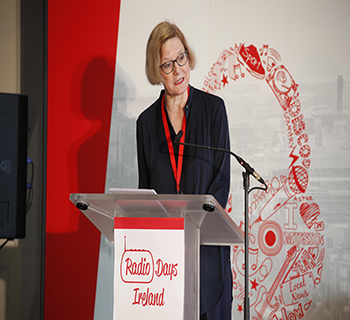 We very much live our lives through radio and Helen highlighted that one of the many key strengths of Irish radio is that we really understand our audiences. From young to old, day in and day out, radio provides nothing but sheer companionship. It has the capacity to generate a massive amount of affection and loyalty and this was evident in Choose Radio’s latest JNLR figures released in January of this year, with 3.1 million listeners tuning in every day.

One thing that Helen emphasised during her talk at Radio Days Ireland was that it is not just about listening anymore, it’s about LISTEN, WATCH and SHARE. While we are all well aware of the profound long-term challenge that is digital – radio needs to expand and utilise the digital platform to the best of its ability. Under 45’s are listening, they may not view themselves as avid radio listeners but they are listening, whether it is on their phone, tablet or laptops. Panic is always unwise in times of uncertainty and Helen advised just how important it is 'for radio to anticipate change and adapt shrewdly'. She gave an example of BBC Radio 1 and how they have a weekly reach of 95% in the UK. The station reviewed their digital strategy, adapted the listen, watch and share model and is now the world’s most watched radio station on YouTube with almost 4 million subscribers.

The JNLR figures showed that 5% listened on other audio devices and Helen believes that this is very much where the future of radio is going. Innovation in both content and technology will be the key to our long-term success. The most recent innovation of voice activated devices such as Echo and Alexa are in fact increasing radio listening. 70% of listening on echo is dominated by radio. It’s becoming part and parcel of every day family routines whereby it’s being engaged with in the home at breakfast and dinner times by all generations. Devices like these will be crucial for the development for radio.

In questioning the long-term future of radio, it’s safe to say that nothing is guaranteed but Helen reassured us that she is hopeful. She left us with her three key survival tips for long-term radio success:

As Helen said, hearing is a primary sense, one that we all value very much in this industry and it was an absolute pleasure to hear what Helen had to say on her significantly successful career and what the future holds for radio.

Helen was speaking at Radio Days Ireland 2018 and full details of her talk can be listened too here.

This article was written by Aine Whelan for Learning Waves Skillnet