Learning Waves Skillnet and IBI are delighted to start announcing speakers for Radio Days Ireland which will take place on 22nd and 23rd February 2018 in the Gibson Hotel, Dublin 1. 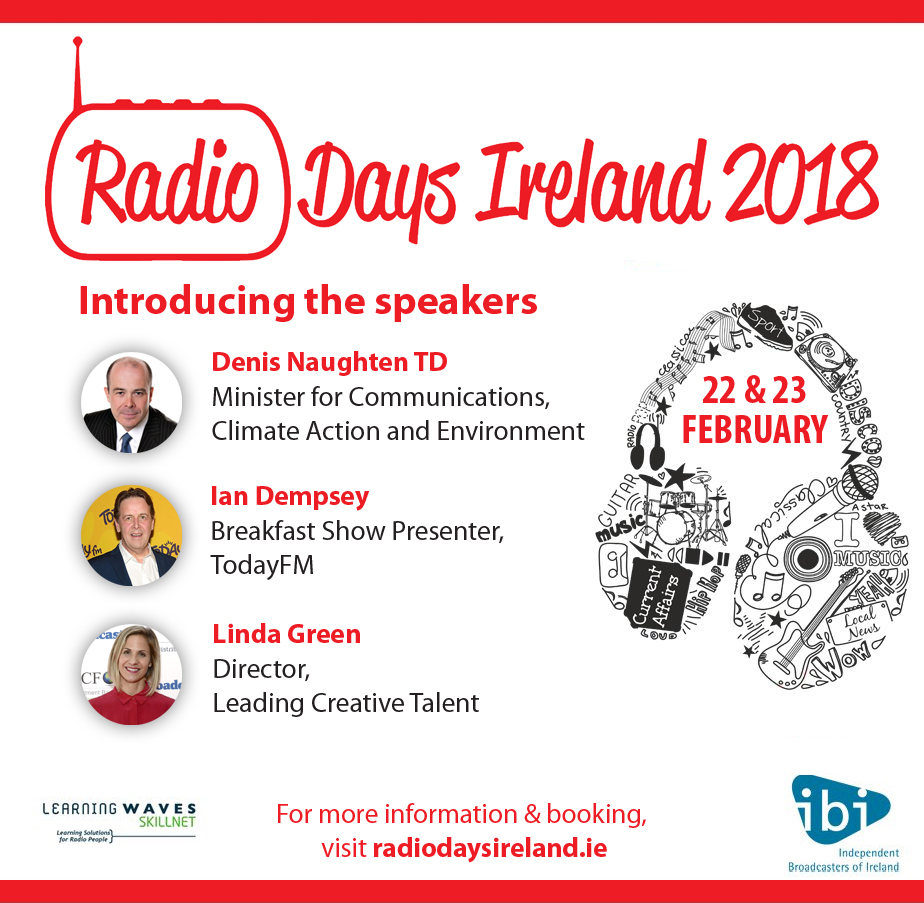 18 in the Gibson Hotel at 2.30pm.  The Minister  then join a panel of speakers to discuss the Future of Radio in Ireland in 2018 and beyond.

Following the panel discussion Helen Boaden, former Director of BBC Radio will join the audience to share with us her thoughts on radio, its future and life after the BBC. Helen  spent 34 years of her extremely successful career at the BBC, beginning at BBC Radio Leeds and ending on the BBC Executive Board. Her love of broadcasting began with a stint on student radio at the University of Sussex. Helen then went on to complete a course in radio journalism and after finishing top of the year, dipped her hand in local radio which in turn, led her to the BBC. As an award-winning radio reporter, she led the team which created the BBC’s multimedia newsroom and was the executive lead on myBBC, which delivered the digital tools for personalised content. In the spring of 2017, Helen was a Fellow at the Shorenstein Centre for Media, Politics and Public Policy at Harvard University. We are looking forward to hearing Helen’s tale first hand.

Also presenting at this unique event will be Ian Dempsey, long-running presenter of the self-titled breakfast show on Today FM. Ian will share with the audience his secrets to breakfast success and how after 25 years in the seat, Ian remains at the top of his game on the national airwaves.  Joining us also will be  Linda Green, director of Leading Creative Talent in the UK who will look at how creative strategies can get the best from teams.

Paul Sylvester, Content Director from Absolute Radio will be joining us alongside Absolutes Breakfast Presenter, Christian O'Connell to share their insights into radio and its future.

With more speakers still being confirmed this conference is shaping up to be one of the most sought after conferences in the media calendar in Ireland in 2018.  The conference will build on Radio Days Ireland 2016 which saw 22 speakers address 180 delegates in Dublin over 2 days.  Bookings for the conference can be made on www.radiodaysireland.ie and the conference is free to Learning Waves Skillnet and IBI members only.  Non-members can attend for a fee.

Both organisations are delighted to partner with IMRO, the Irish Music Rights Organisation, Skillnets, the organisation driving enterprise-led training through networks and the BAI, the Broadcasting Authority of Ireland as main sponsors of this unique event.  We look forward to seeing you there.