News Radio - A powerful medium for building brands and connections

Radio - A powerful medium for building brands and connections.

This was clearly the message coming from the Choose Radio event held on Thursday 18th May 2017 in Number Twenty Two, South Anne Street, Dublin.  The event was organised by the Choose Radio group  and supported by the JNLR committee.  It was attended by over 100 advertising executives from radio station sales houses, advertising agencies, brand managers, along with representatives from the JNLR committee, the BAI, and Learning Waves Skillnet. 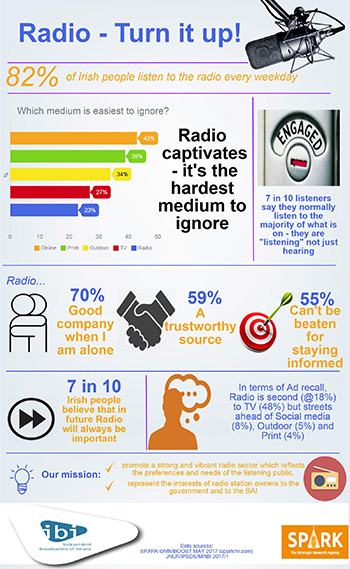 to see what they thought of radio in Ireland today.  Justin Healy and Peter Kenefick found through their research that ‘7 out of 10 listeners said they normally listen to the majority of what is on – they are listening, not just hearing’.  The research also found that ‘radio captivates’ and among those surveyed they said, ‘radio is the hardest medium to ignore’. 59% of those researched found that radio is a ‘trustworthy source’, while ‘7 out of 10 believe that in the future radio will always be important’.  In terms of ad recall and its importance for advertisers, the research found that ‘radio doesn’t have it all its own way, BUT Radio is a clear second behind TV.  In conclusion, Peter and Justin said, ‘radio is like Kylie, you just can’t get it out of your head’ and this is hugely important from a brand and advertising perspective in terms of getting your message and your brand out to a large captive audience.

Following from Justin and Peters presentation it was then over to the brands to tell the audience about their experience of radio and how it has helped build their brands.  To kick start the conversation it was Jennifer Fitzsimons, National Advertising Manager with Harvey Norman, in conversation with Q102’s CEO, Scott Williams.  Harvey Norman, as a brand is a huge fan of radio in terms of a medium to communicate with their customers.  Jennifer told the audience, that Harvey Norman ‘built its brand on radio in Ireland’ and through correct targeting, radio can offer so much to a client like Harvey Norman.  All of the media buying and creative for Harvey Norman is all done in house and in asking Jennifer what more can radio do, she responded by saying, ‘come to us with great ideas, great content, help us to educate the nation about our products and how they can enhance their life, save them money, etc and radio is the perfect medium through which we can do this’.

Next up it was Catherine Buggy, founder of Boutique Bake, a small Irish food business who worked with Urban Media to develop a campaign to help build her brand. The campaign began with radio only for two weeks and then display advertising along with a social media giveaway was added, while the radio campaign continued to run for an additional two weeks.  Catherine told the audience that because of her radio campaign, '95% of people searched for her product and of those 95%, 89% went to her website, and there was a 189% increase in sales for the month the campaign was running versus the previous month'.

Michelle Davis from Mediacom told us how their partnership with Media Central for the release of the Universals film Sing helped create their very own online radio station, Sing FM.  The campaign was On Air, On Line, Social and on Sing FM.  As a result of the campaign Universal Pictures and Illumination Pictures scored the biggest opening weekend for the year in 2017.  It was the biggest opening night in Ireland for an original(non sequal) animated feature and Sing charted the number one spot at the All Ireland box office.  The creation of Sing FM empowered the film to sell the experience on an emotional level, it helped drive people to the cinema, it created curiosity with the characters and it aided in selling the music as a USP.

Livewire’s Managing Partner, Jill Downey, a scientist by background, told the audience that ‘radio sponsorship is an excellent platform to elevate other sponsorships’.  The key benefits of long term sponsorship according to Downey are : ‘branding and top of mind awareness’, ‘ability to build reach and frequency quickly’, ‘association and image transfer’ and ‘an active and engaged fan base’.  Jill also told the audience that radio sponsorship dates back to 1927 and she knows it absolutely works.  In conclusion, Downey, with her science hat on, said that while she knows it works, that it is ‘remiss of the industry to not have the scientific research to show that it absolutely works’ and she called on the audience to engage in research and to have such research available within the industry and for the wider distribution to brands in order to grow the value of radio sponsorship.

Dave Bruen, Managing Partner at Mindshare told us about a campaign between Failte Ireland and Communicorp One.  Dave spoke about how, through the use of bin-aural technology they were able to create a campaign that allowed the listener to become fully immersed in the Wild Atlantic Way experience.  It was a unique and innovative approach to a campaign that yielded significant results.

Finally, it was over to the radio station bosses and on stage were FM104’s CEO, Margaret Nelson, KCLR’s 96FM, CEO, John Purcell, CEO of Today FM, Keith McCormack and the boss of 2FM, Dan Healy.  The session was facilitated by Laura Slattery from the Irish Times. 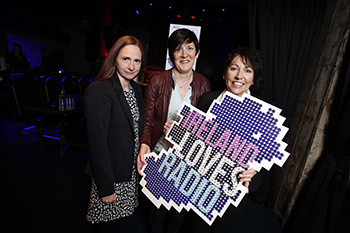 All four bosses were in agreement that ‘radio is one hell of a medium’ and that as an industry, ‘we have more in common than separates us’.  When questioned about radio and digital, the general consensus from the panel was that ‘the radio business has changed over the last number of years and radio stations have to change with it’.  Radio stations should partner with social channels and not give content away and there was a note of caution from the bosses, ‘we have got to visualise audio but not at the expense of radio content’.  Everything we do on social has to have a return back to the station as we are ultimately in the business to make money.  In conclusion a note from the bosses is that, ‘it is now about total solutions for clients and we must build connections on social media and transfer the trust to bring brands in from our social media channels’.

The evening concluded by thanking everyone for their support and in particular thanks to the JNLR committee for their support, to Gabrielle Cummins and Lisa NiChoisdealbha for organising the event and the final message of the evening to everyone out there was 'Choose Radio'.