News Creating Visual Content for Radio – Views from across the Globe

Creating Visual Content for Radio – Views from across the Globe.

Learning Waves Skillnet is delighted to partner with MojoCon 360 in Galway next week to bring a FREE fringe event to those interested in hearing more about Mobile Journalism for Radio and Social.  The event will focus on ‘Creating Visual Content for Radio’ and how this content can be shared on radio stations social platforms.  An expert panel of speakers from around the world will share their stories and experiences, while at the same time offering you some practical tips and hints as you embark on your Mojo journey.

This unique event will take place in Galway Bay FM on Thursday 4th May 2017 from 7.30pm to 9pm.  The expert panel of speakers includes :

Nick has been round the world twice to more than 20 countries reporting on some of the year’s biggest stories for his radio station, BBC 5 live.  He reported 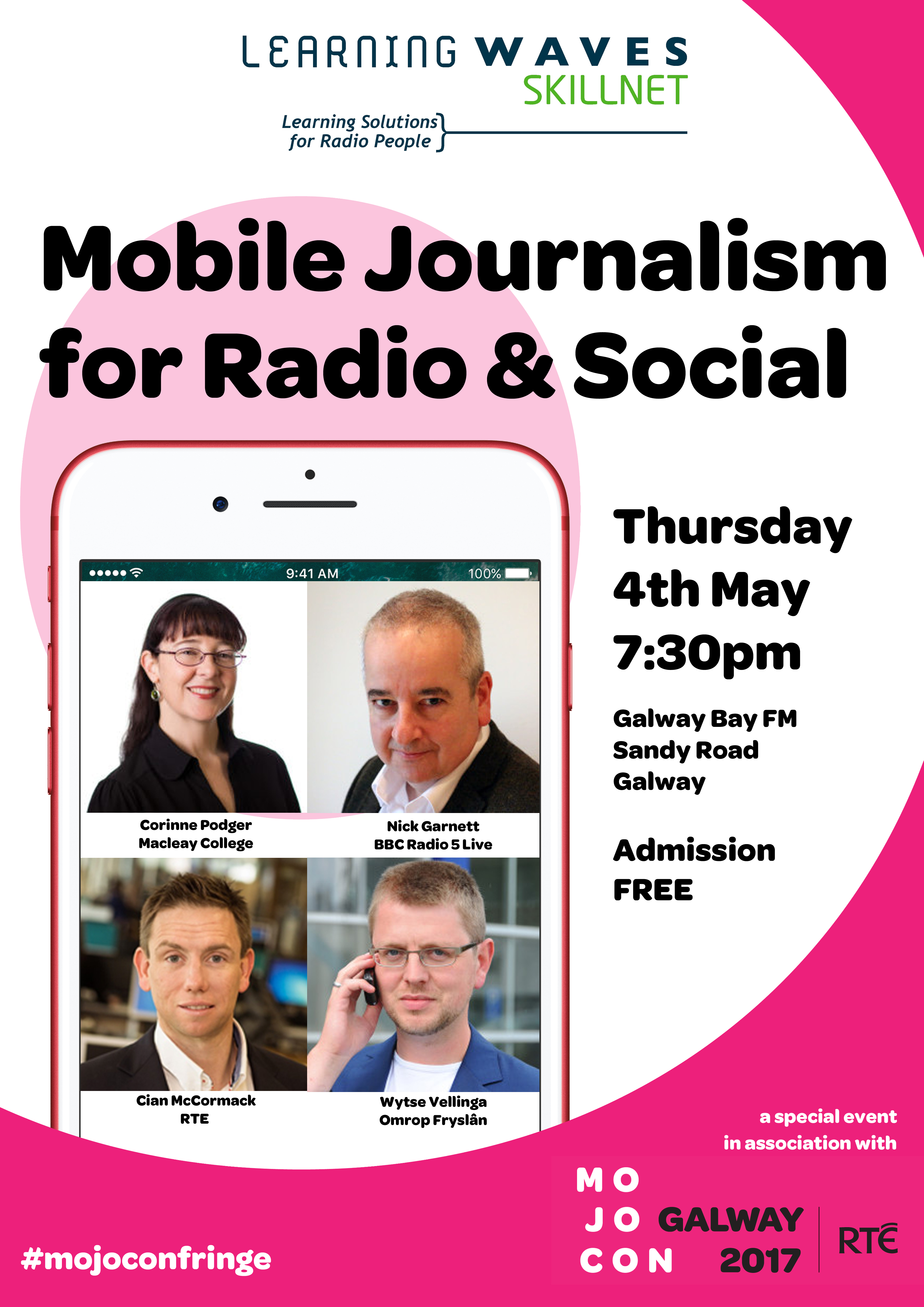 on the deaths of over ten thousand people last year.  Less than a month after RTÉ Mojocon 1 he was in Nepal covering the aftermath of the earthquake – broadcasting one of the first Periscope’s from a major news event.   Most of his broadcasts are on iPhones, backed up by portable satellite dishes when communications are difficult – he’s become known for carrying his radio car in his rucksack.  In November he was sent to cover the Paris attacks – using his phone, yet again, to be able to travel round the city at high speed without having to rig and derig a complicated technical setup each time.  He went through over 20GB of data in six days broadcasting live radio and TV from the scene of the attacks.  His year on the road was the subject of a documentary on 5 live over Christmas.

Cian is a multi award-winning reporter who works as radio and video journalist and has travelled extensively abroad and at home covering stories for RTÉ.  When in Ireland, which is most of the time, Cian hits the road regularly recording news and feature series throughout Ireland on life, politics and anything affecting people.

For radio he records and edits on his iPhone and iPad. His  ‘Ireland by Bike’ series, which was broadcast on RTÉ Radio 1’s Morning Ireland was mostly recorded on his iPhone and edited and scripted on his iPad with video content streamed online as he broadcast on live on radio. Next time he cycles Ireland on his bike he says he will have the confidence to leave his satellite dish and zoom recorder at home

Wytse has been working in broadcast journalism for over a decade now, both in radio and TV-journalism. For the last two years he has done over one hundred reports using just mobile phones for Omrop Fryslân (in the north of the Netherlands). Wytse works with iPhone, Android and WindowsPhone and is experimenting with new ways of storytelling the mobile phone offers. He has also been training journalists in the Netherlands in working as a MoJo.

Corinne is a tri-media journalist and trainer with over 20 years’ experience reporting for international news organisations. In early 2017 Corinne joined Macleay College, one of Australia’s premier private vocational colleges, where she is teaching mobile journalism, video journalism and newsroom reporting for the College’s Journalism BA and Diploma courses. Prior to this Corinne, worked in newspapers in Sydney, BBC World Service, ABC International, Thomson Reuters Foundation, BBC Media Action and Journalism.co.uk in roles that ranged from a news reporter, producer, trainer and consultant in the world of mobile journalism.

At this event you will hear from the speakers on their Mobile Journalism journey and how they create visual content for radio using a variety of equipment and resources while at the same time overcoming the challenges that can sometimes be perceived in relation to mobile content.

If you wish to attend this event, please email teresah@learningwaves.ie on or before Friday 28th April 2017.  Places are limited to 25 for this session.