South East Radio are delighted to receive a Leading Lights Awards for its unique road safety campaign called Give Your Phone the Boot.

At a ceremony at Farmleigh in Dublin Liz O’ Donnell, Chairperson of the Road Safety Authority presented the media award to South East Radio’s 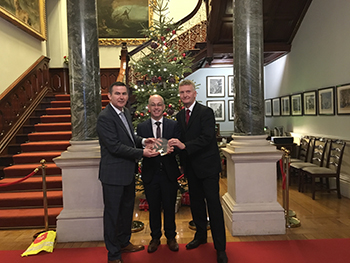 Managing Director Eamonn Buttle, General Manager Liam Dwyer, Programme Controller & News Editor Michael Sinnott and Morning Mix Presenter Alan Corcoran(See picture).
Give your Phone the Boot was a brand new home grown initiative from South East Radio to highlight the danger of using a mobile phone when driving and to instigate a change in habits by encouraging listeners to put their phone in the boot.

The month long launch campaign commenced on the 29th April 2016. A stark promotion announced the deadly statistics issued by the Road Safety Authority.  Using mobile phones is the BIGGEST distraction for drivers on our roads, even though the low number of penalty points issued belie the extent of the issue.  A special South East Radio Morning Mix programme was dedicated to the launch of Give your Phone the Boot.

To drive this message home, one of South East's reporters, accompanied a driving instructor and immediately saw the impact texting had on her ability to control the car she was driving.  4th class children recounted their fear of seeing adults talk or text while driving. They helped push a giant phone cut out into a car boot so that their message could be seen on social media.

Local sports teams and businesses supported the bespoke campaign. The message captured the imagination of TY students who designed a poster.  Experts say it takes 21 days to break a habit. A 21 day countdown promotion ran to remind people to Give their Phone the Boot and break the habit.

When your phone is in the boot, you are safer, your family is safer and the road users on your journey are safer.