The recent publication of the JNLR results highlighted that 'Ireland still loves Radio' with 2.9 million people tuning in to radio every day. 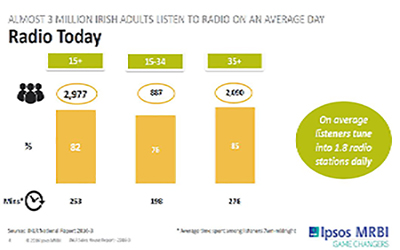 The results also show that the average time spent listening has increased 4.22 hours per day.  Over 95% of listening occurs on AM/FM radio and a mere 3% on mobile. This is in comparison with 27% of all adults who listen to the radio on a mobile or tablet in the UK market (Source RAJAR 2016) Radio continues to be the faithful companion to the Irish public, with 82% of us tuning in every day. This has remained relatively consistent over the years with minor +/-1% fluctuations.

The real winning stations in radio land, are those that have moved with the times, taken the “on air” to “off air”, constantly changing, questioning and above all engaging with their audiences to future proof their businesses. Advertisers have also realised the power of radio platforms and seldom is it a simple spot buy anymore but a 360 partnership utilising social channels.(Source Adworld 28 October 2016).

The JNLR results were published as one document following the results and this has made life easier for media watchers, according to Colette Sexton of the Sunday Business Post.  This was the first time in radio history that independent broadcasters and RTE came together to present the results in one simple document.  Media agencies rejoiced as they now have one document, Choose Radio report, that highlights the key information and facts.

It is hoped that Independent Broadcasters and RTE will continue to further develop this approach to the publication of JNLR results, a publication which clearly shows the strength of the medium of radio, which in turn will hopefully see an upturn in advertising spend on radio.

Learning Waves is delighted to support this initiative and to work with IBI and media sales houses to further promote and strengthen the medium of radio.