Learning Waves and IBI are delighted to start announcing speakers for our upcoming Radio Days Ireland Conference on 17th and 18th October 2016.  The conference will open on Monday 17th October 2016 at 2pm with Nessa McGann, Learning Waves Chairperson introducing Dennis Clark, Vice President of Talent Development in iHeart Media, USA.  Dennis Clark loves nothing more than helping talent and programmers make great radio. A lifelong radio junkie, he instantly knew that working with personalities was his calling when he joined the team of Rick Dees, the legendary LA morning man, 35 years ago. 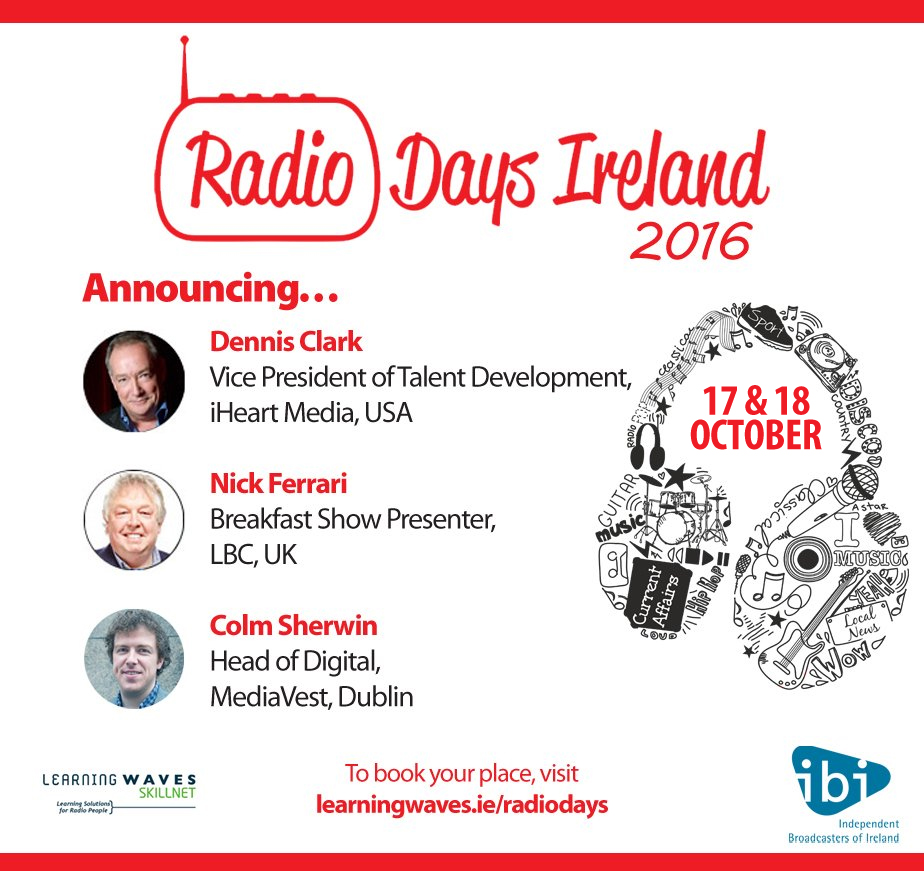 Since then, he’s developed an unmatched track record of success  As iHeartMedia’s VP of Talent Development, Ryan Seacrest, Elvis Duran, Kane, Johnjay and Rich, Bobby Bones, Nikki Sixx, The Breakfast Club and dozens of other personalities call on Dennis to help ensure that their shows are as engaging, relevant and absolutely can’t-miss as possible.  Dennis now consults with stations across Europe, Australia, New Zealand and Japan.  Dennis will talk to us about developing new radio talent, strengthening established talent and training programmers on how to coach their teams most effectively.

At 3pm on Monday, Colm Sherwin will form part of a panel looking at Selling Digital - Solutions for Radio.  Colm is Head of Digital for Mediavest (part of the Core Media Group) and has been working in digital media for more than 9 years. He began his career in Core Media in 2007 and re-joined MediaVest in 2012 after spending some time working in Zenith Optimedia UK. Colm has extensive experience across Irish and worldwide brands such as British Airways, O2, Three, Aviva, Electric Ireland, and Ulster Bank.  Colm will be joined on the panel by Cera Ward, Country Director, Large Customer Sales, UK & Ireland, Google and more speakers will be confirmed in the coming days.

At 4pm, Nick Ferrari, Presenter of Nick Ferrari at Breakfast on LBC will talk to Neil Prendeville, Breakfast Presenter, Corks Red FM about 'What makes great speech Radio and how to create great content that connects with your audience'.

Nick is the multi award-winning host of Nick Ferrari at Breakfast on LBC. From a highly successful career in the national press, where he was Editor of the Bizarre column in The Sun and Deputy Editor of the Daily Mirror, Nick moved into broadcasting.  He became Launch Editor of the Sky News channel in 1989 and was later promoted to Vice President of News and Programming at Fox TV in New York.

In 2001, he joined LBC – Britain’s first national commercial news talk station - and became the presenter of the weekday breakfast show. Since then, he has won many prestigious awards, including two Sony Radio Gold Awards: Best Breakfast Show and Speech Broadcaster of the Year. Nick has also won two Arqiva Commercial Radio Awards: Breakfast Show of the Year and the coveted Arqiva Gold Award.  In the latest official radio audience figures released by RAJAR, Nick Ferrari now reaches a huge 977,000 listeners each week – the highest number since he started on LBC Breakfast just over a decade ago.

The conference will resume on Tuesday morning at 9am.  Stay with us for more details and for speaker confirmation. All updates will be available on  www.learningwaves.ie/radiodays

To book your place at this unique radio conference go to www.learningwaves.ie/radiodays.  There is also an opportunity to book accomodation on the Monday night in the Double Tree by Hilton Hotel on this page.  We look forward to seeing you there.